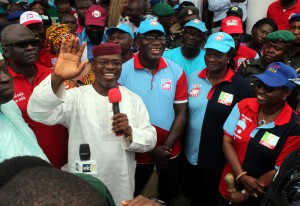 Former Governor of Ekiti State, Engr Segun Oni, on Monday said that his decision to join forces with the incumbent Governor of the state and candidate of the All Progressives Congress (APC) in the June 21 election, Dr. Kayode Fayemi, is about erecting a new platform for the future of the state.

The former Governor, who welcomed Fayemi to his  Ifaki-Ekiti country home in company of his supporters  and political associates from the PDP, said the only important thing at this point in Ekiti is the future of the state and the need to build on the gains of the past three –and- a- half years.

Fayemi had paid a courtesy visit on Engr Oni at his home before commencing the Re-Elect JKF Campaign tour of  Ido-Osi Local Government Area.

Oni said all well-meaning stakeholders must realise that the June 21 election is greater than personal interests or ambition, but about who is in a better position to give Ekiti a future everyone can be proud.

“Tomorrow is greater than today and yesterday. Let us look at our future. I am not talking perfection. I know God is the only one who is perfect. We must not focus on personal interests. Let us think about the future of our children. Tomorrow has started today.”

Oni said Dr. Fayemi had done well given the scarce resources available to the state, praying God to grant him victory in the governorship election.
“The Almighty God will grant you honour beyond your projection. This venture will succeed. Your tenure will be a huge success,” the former governor prayed.

Responding, Governor Fayemi who was accompanied by his deputy, Professor Dupe Adelabu, and his wife, Erelu Bisi Fayemi, described the defection of Oni as a lesson that leadership is about sacrifice and foresight.

Describing Oni as a true leader, Fayemi said the former governor chose to stand on the side of the people, even though it was not materially beneficial to him.
“What my ‘egbon’ has demonstrated today is that he is a true leader. The ruling party is still in government. He could make demands, but for him, he has demonstrated that he is a man of honour from the Land of Honour, and I know that God will always bless his ways. He has followed his conscience. He has followed his conviction. He has demonstrated that character is important to our value system. We have done everything to follow in those footsteps as Ekiti sons and daughters,” Fayemi said.

Fayemi said the coming election may not necessarily be about performance as his performance is not in doubt, adding that the election is a decision between right and wrong, light and darkness.

“His Excellency, Segun Oni has led the way. He has lit the candle. The rest of us who are his followers owe it a duty to start lighting the candle in all the 16 local governments in the state.”

The governor urged APC members not to regard the hitherto PDP members who defected alongside Segun Oni as new members, but as equal members of a big family.

“This family is not APC or the new PDP. This party is called Ekiti Progress,” said Fayemi.

Some of those who joined Oni to receive Governor Fayemi and his campaign team at the former governor’s residence in Ifaki-Ekiti were a former Speaker of the State House of Assembly, Taiwo Olatunbosun, Former Commissioner Kayode Babade, former members of Ekiti House of Assembly, Lai Oke, Femi Adeleye, commissioners in the Oni administration, Abiodun Bamiteko, Mrs. Iyabo Babatunde, former Special Adviser, Policy and Strategy, Mr. Ben Oguntuase, Mrs. Motunde Dayo-Fajuyi, amongst others.

Ajibola Dabo: “Why I Can’t Wear Other Colours Except White”

I Am Really Disappointed In My Players – Mourinho