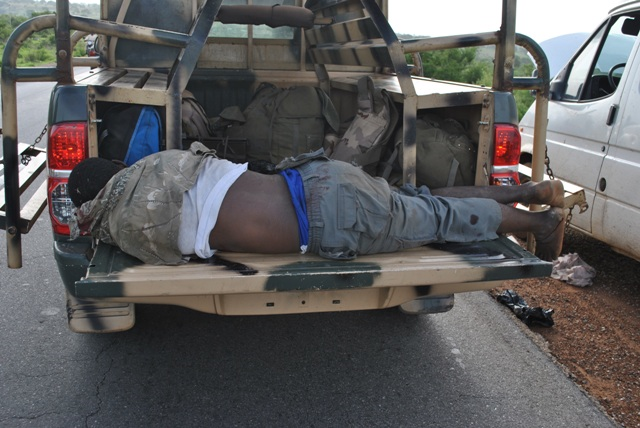 A notorious terrorist, who has led serial attacks on security personnel, Mallam Husaini has met his waterloo in an encounter between his group and a military convoy along Jos – Bauchi highway.

Husaini, who leads a cell of the terrorists billed to operate in the Plateau, is known to have led an attack on Headquarters, Police Special Anti-Robbery Squad in Abuja, in November 2012. He is also known to have coordinated the daring attack on a convoy conveying troops billed for a foreign peace keeping operation as they travelled from Lokoja to Kaduna in January, 2013. The attack left 2 soldiers dead.

The terrorists’ gang met their end when they attacked a military convoy while on an operational patrol between Jos and Bauchi. At the end of the encounter, the Ford bus used by the terrorists was captured, 8 primed Improvised Explosive Devices, rifles, pistols and about 70 rounds of ammunition.

In a related development, security personnel at Malamfatori in Borno State, while pursuing a band of terrorists, who attacked a police station there, recovered the vehicles stolen by the gang as it was abandoned while they fled into Niger Republic.

Other items which included uniforms of security organisations as well as protective gears, boots and other goods which they had stolen from various locations towards Nigeria – Niger border, were also recovered by troops.

Headie Awards: Davido’s Fans Forced Their Way To The Toilet With...

Breaking The Wall Of Secret Ownership Is An Existential Matter –...

Should Mourinho Be Praised For Manchester United’s UCL Qualification?