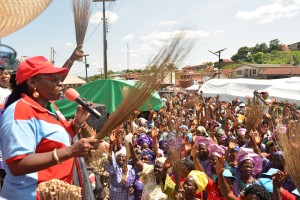 Wife of Ekiti State Governor, Erelu Bisi Fayemi, with the All Progressives Congress supporters during the party’s women campaign for the reelection of Governor Kayode Fayemi, at Efon-Alaye.

The Ekiti State women wing of the All Progressives Congress has vowed that the presence of soldiers or political thugs will not intimidate them from exercising their franchise during the June 21 governorship election.

The APC women, led by the Wife of the Governor, Erelu Bisi Fayemi, said this at a campaign for the reelection of Governor Kayode Fayemi, which held at Efon, Ijero and Ekiti West Local Governments, on Monday.

The campaign train also stopped at Oja Oba Oke-Imesi and Oja Oba Ipoti-Ekiti, where the governor’s wife bought commodities above the selling prices as part of her market outreach and women empowerment.

Setting the tone for the rally, the governor’s wife urged the women to be steadfast in their campaign for the governor through to the election day, no matter the obstacles set before them by the opposition parties.

As the women begin house-to-house campaign to win more converts for the party, she urged them to educate the electorate on the need to cast their votes for her husband to guarantee continuity of all the lofty programmes and policies of the administration.

This was just as the Commissioner for Culture, Arts and Tourism, Chief Ronke Okusanya, told the rally that the masterminds of the attack on her, last Monday, thought it would stop her from further mobilizing the women of Efon-Alaye for Fayemi’s reelection.

Fayemi said, “If they bring soldiers on the day of the election, please don’t allow that to intimidate you. Arrive at the polling unit early and don’t go their wearing any cloth having the symbol of APC or the picture of Governor Kayode Fayemi, because it violates the electoral law.

“Don’t foment trouble. After casting your votes for Governor Kayode Fayemi, please wait behind and ensure that the votes are counted in your presence. Follow the result to the collation centre. We are all stakeholders here. Nobody can intimidate you.

“If anybody import thugs to the state to frighten us, they will meet their waterloo by the grace of God, because in God trust.  The governor has performed very well and his achievements are enough to guarantee his victory at this election convincingly.

“As you move from house to house, if anybody tells you he or she wants to vote for any opposition party, please try and explain to them that they can only do that if they want social security for the elderly to stop, if they want violence to replace the pervading peace in the state and if they want all the good things my husband is doing to stop.”

Addressing the rally at Efon-Alaye, Okusanya said she did not do anything to warrant last Monday’s physical assault on her, which she said was premeditated.

The septuagenarian vowed not to be cowed by the antics of the opposition, asking the youth not to allow themselves to be used for thuggery.

Okusanya said, “They thought by attacking me APC women will be frightened from campaigning for Dr. Kayode Fayemi. They have failed. Don’t be afraid, don’t be deterred. We are marching on with our support for the governor until we get to the promised land.

“The governor and his wife have life-changing agenda for women and indeed every citizen of the state. They have more empowerment and quality healthcare for us. Efon-Alaaye, just like every other towns, have tangible projects to pinpoint as dividend of democracy under Governor Fayemi.”

Laws Are Operating In Countries Like Ghana And Kenya – Kayode...

Coutinho’s Injury Not An Excuse – Klopp

I Am Not A Robot – Ronaldo