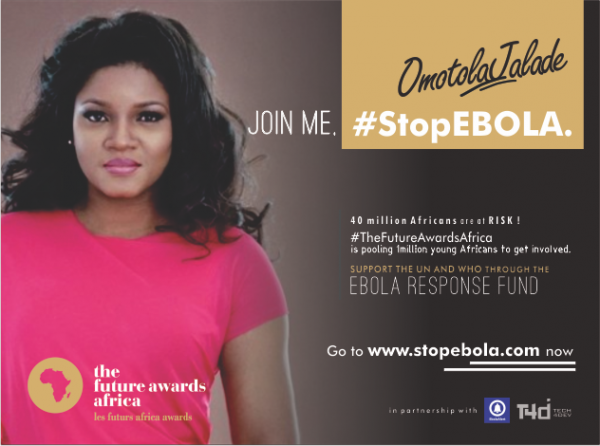 The Future Awards Africa (TFAA) has announced the leading influencers for its global campaign to pool 1 million young Africans to act against Ebola in Liberia, Sierra Leone and Guinea. The #StopEbola campaign will be led by TFAA Young Person of the Year 2013, Ashish Thakkar and Africa’s leading creative icons – Genevieve Nnaji, Omotola Jalade-Ekeinde and Paris-based Asa Elemide.

The #StopEbola campaign will get young Africans to support the World Health Organization by donating social media updates and a minimum of $25 between now and the awards date via the portal www.stopebola.com. The funds go directly to the United Nations Ebola Response Fund. The Future Awards Africa holds on Sunday, 7 December 2014 at the Intercontinental Hotels in Lagos, Nigeria.

“Ebola has been defeated in Nigeria,” said Nnaji who has actively supported causes including the Pink Ball against cancer. “This shows that with the will and resources it can be defeated anywhere else. We need to get involved beyond talk and beyond sympathy. As long as it remains anywhere in Africa, we are all at risk, and we can come together to stop this from happening. Join me, and join all of us now on www.stopebola.com.” 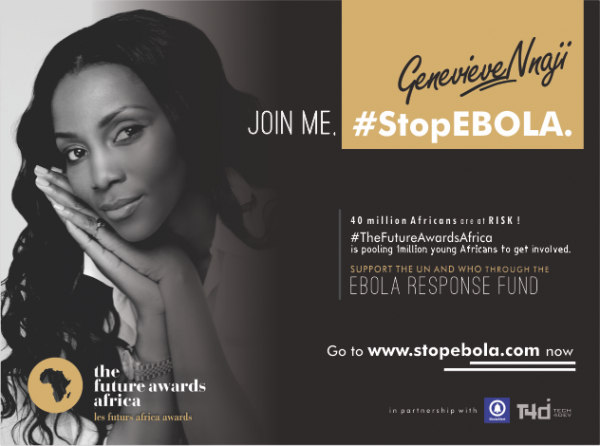 “This goes to the core of what is important to me, and what should be important to all of us who are very concerned about our continent,” said Jalade-Ekeinde, who has been spokesperson for Amnesty International and the United Nations. “Just when the world has begun to pay attention to Africa as a destination for rapid growth and investment, we cannot allow Ebola define the narrative. We need to put a stop to this immediately, and young people need to take the lead.”

To be part of the campaign, it takes just 3 easy steps:

The Future Awards Africa 2014 is presented in partnership with Microsoft and the Tony Elumelu Foundation and is headlined by Vitafoam.

For more information, visit @TFAAfrica on Twitter/Instagram or the website www.thefutureafrica.com/awards . The official hashtags for the 2014 awards are #TheFutureAwardsAfrica and #TheFutureAwards2014.

ABOUT THE Future Awards AFRICA

The Future Awards Africa has been called the ‘Nobel Prize for Young Africans’, and the ‘most important youth awards’ by Forbes. It is a set of prizes given annually to celebrate and accelerate innovation, creativity and enterprise amongst young Africans aged 18 – 31. It has produced over 150 winners and over 1500 nominees since its first edition in 2006.

It is presented in conjunction wit The Future Project, which has a mandate to build empowered citizens across Africa, through (inclusive) enterprise and (active) citizenship. This focus on Human Capital Development is informed by our value proposition: Africa’s growth needs a generation of young people who are gainfully employed and able to demand and secure better leadership.

Founded by the Chude Jideonwo and Adebola Williams, TFP is supervised by a Global Board of Advisors drawn from Africa, Europe, North America and the Middle East, including the Coordinating Minister of the Nigerian Economy, Dr. Ngozi Okonjo-Iweala; Senior Economic Advisor with the Open Society Foundations, Dr. Obiageli Ezekwesili; co-founder of ONE, Jamie Drummond and the Chief of Cabinet with the Africa Development Bank, Anne Kabagambe.

Morata Is Efficient In Front Of Goal – Alberto Toril

US President lands in Philippines as defence pact signed

You Can Never Write Off Ronaldo Or Messi – Kane