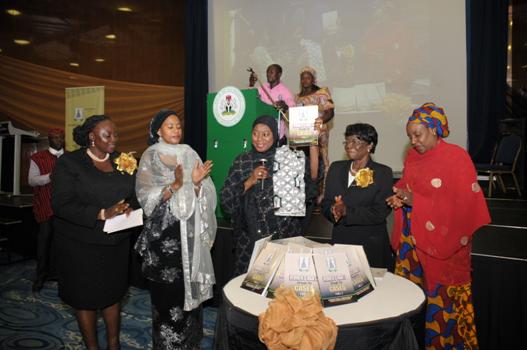 ABUJA (Vice President’s Wife Office Report) – The Wife of Nigeria’s Vice President, Amina Namadi Sambo (Dr) has  commended the International Federation of Women Lawyers (FIDA) for their support in the fight for the right of women and children in Nigeria; saying the achievement of FIDA has helped to bring hope to many Nigerians in their plight for justice.

Amina Namadi Sambo made the remark in her speech delivered at the 50th Anniversary of the International Federation of Women Lawyers (FIDA) Nigeria which held at the Transcorp Hilton, Abuja on Tuesday November 4, 2014. She also said that she has been partnering with FIDA since her days as Wife of the Governor of Kaduna State; noting that FIDA activities and programs have created awareness on the right of women and children on equality, development and education in the country.

She bided the organisation to continue with their good work to humanity, indicating that the Government will give them the necessary moral and financial support needed to manage their affairs.

The Minister of Special Duties and Inter-Governmental Affairs, who is the Supervising Minister of Labour and Productivity, Kabiru Tanimu Turaki as the Chairman of the occasion expressed delight for being present with people who are courageous enough to stand up for the right of women and children, the bedrock of nations. He also commended FIDA for their courage to fight for gender equality in Nigeria; stating that this administration is ready to support women in their activities in defence of the right of the down-trodden. He added that the Government has granted FIDA the demanded chance for women to rise and take their rightful positions in the country.

Hauwa Evelyn Shekarau noted that FIDA Nigeria is a branch of FIDA International which has membership in over seventy-two countries in all the regions of the world and has a consultative status with the United Nations. “FIDA Nigeria has observer status with the African Commission on Human and Peoples Rights; while their objective is to protect, promote, preserve and enforce the rights and interests of women and children, especially indigenous peoples,” she inferred.

Hauwa Shekarau called on the government and notable Nigerians to encourage and support the organisation morally and financially to enable them achieve their aims and objectives as well as carry out gainful activities aimed at protecting Nigerians.

The occasion was attended by the Wife of the FCT Minister, Aisha Bala Mohammed; the Founding President of FIDA Nigeria, Aduke Alakija;  Senior Advocate of Nigeria, Michael Opara (Justice), S.A Awomolo (Chief) and his wife; Nkechi from the National Council for Women Society (NCWS); Rakiya Gambo and other notable Nigerians.

Just a Split Second Can Change Everything: 10 Major Distractions a...

I Will Look Into Arsenal’s Poor Starts – Arsene Wenger

Men Just Want To Sleep With Me – Nollywood Actress Biola...

‘Mirror Boy’ Filmmaker Is Back With Another Movie