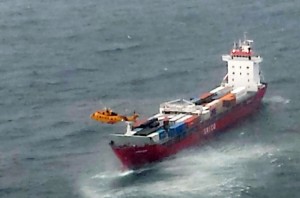 Twenty-five ships carrying petroleum products and other commodities have arrived Nigeria through Lagos, according to the Nigerian Ports Authority (NPA).

The ships are waiting to discharge their contents at the ports, the Authority said yesterday.

The NPA noted that 12 of the 25 ships are laden with petrol, while a ship was carrying Low Pour Fuel Oil (LPFO).

The others are loaded with bulk rice, general cargo, bulk gypsum, fresh fish and bulk fertiliser.

The NPA disclosed that 44 more ships laden with assorted goods, foods, petroleum products and other commodities were expected to arrive at Lagos ports from December 30 to January 15, 2015.

“Two other ships are bringing into the country petrol and diesel, while two ships containing buckwheat and four others containing fresh fish are also being expected, ” NPA said.

Brazil Crash Out Of Copa America