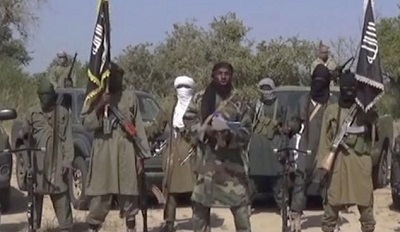 At least 30 people were killed in Boko Haram raids on two villages in northeast Nigerian Borno state near the town of Chibok, a community leader and resident told AFP on Friday.

The attacks on Thursday targeted the villages of Thlaimakalama and Gatamarwa, which were torched by the rampaging militants, said Pogo Bitrus, head of the Chibok Elders Forum.

“From information coming in from residents of the two villages at least 30 people were killed in the attacks”, he added.

Luka Haruna, who lives in Chibok, some 15 kilometres (nine miles) away, gave an identical death toll and added: “The two villages were completely destroyed”.

Fifty-seven managed to escape but 10 months on, 219 are still being held.

The insurgents were passing through the two neighbouring villages as they fled the nearby town of Askira Uba, which they invaded on Monday evening, he added.

Residents who fled the town said they appealed to troops based in Chibok some 25 kilometres away but they allegedly refused to deploy.

The militants fled when soldiers were eventually sent. Some left towards Gwoza, on the border with Cameroon, and the Sambisa Forest, where Boko Haram has camps.

Boko Haram seized Gwoza in June last year ‎and later declared it a part of their Islamic caliphate. The town is considered to be the group’s headquarters.

Nigeria’s military said on Thursday that fighter jets had bombarded Sambisa Forest after Chad, which is involved in the regional fight-back, attacked the nearby town of Dikwa.

Bitrus said: “The insurgents mowed everything in sight as they fled Askira Uba and these two villages which they passed through became targets.

“They opened fire on residents and set houses on fire as they drove in a huge convoy”.