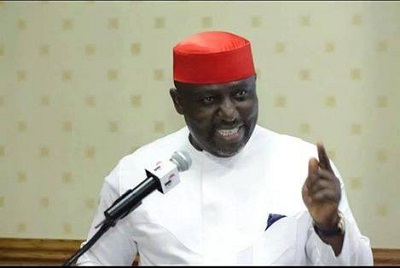 Mr. Okorocha, the candidate of the All Progressive Congress (APC), won in 20 out of the 23 Local Government areas in the state where the supplementary election was held, polling a total of 31,326 votes.

With the outcome of Saturday’s supplementary election, Mr. Ihedioha’s hope of overtaking the governor and subsequently emerging winner have been dashed as he was trailing Gov. Okorocha with 79,525 votes in the substantive poll a forth night ago.

Announcing the total result (substantive and supplementary) polled by the candidates in the wee hours of Sunday, the Returning Officer, Prof. Oyewusi Ibidapo-Obe, declared Mr. Okorocha winner, having polled the highest number of valid votes and having satisfied the requirement of the law.

Coming second was Mr. Ihedioha with 320,705 while the All Progressives Grand Alliance candidate, Emmanuel Ihenacho, came a distant third with 28,434 votes.

In Abia State, the PDP candidate, Okezie Ikpeazu, has been declared winner.

The INEC returning officer in the state, Prof. Ozumba, while announcing the result early hours of today in Umuahia, the Abia State capital, said Mr. Ikpeazu garnered a total of 264,713 votes to defeat his rival and former Managing Director of Diamond Bank, Alex Otti, who polled 180,882.

Mr. Otti is the APGA candidate for the polls.

I Went To Court After The Elections For Democracy Sake –...