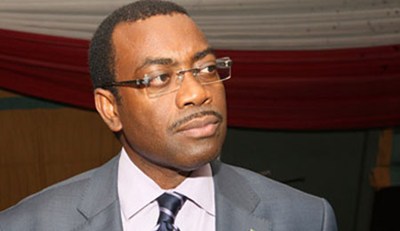 In a statement on Sunday morning, Adesina said “I am truly humbled by the support of many Presidents across every region of Africa. Africa is my home.

“I would like to give my special thanks to a few people in particular without whom this success would not have been possible: former President Goodluck Ebele Jonathan for his nominating me, his confidence, and his steadfast, enthusiastic support; President Muhammadu Buhari for his strong endorsement and rallying support for us; and Dr. Ngozi Okonjo-Iweala for her vital role and tremendous effort in delivering this successful outcome. Dr. Okonjo-Iweala, as Nigeria’s Finance Minister, worked passionately for our campaign, and our success would have been impossible without her tireless work shepherding support among many of the esteemed Finance Ministers and Governors at the AfDB”.

The former minister also singled out a few more leaders whom he expressed appreciation to over his election.

“Our leaders rallied behind us in a historic display of unity of purpose and common commitment. I would like to extend my sincerest thanks to former President Olusegun Obasanjo, former Head of State General Abdulsalami Abubakar, former Head of State General Yakubu Gowon, former Vice President Namadi Sambo, and former Vice President Atiku Abubakar, who worked determinedly to build support behind my candidacy among African leaders”.

He said he was “deeply humbled and honoured to have been entrusted with the great responsibility of leading the African Development Bank (AfDB) at a time that presents such great opportunities and also profound challenges for our continent.

“The AfDB campaign and election has been an incredible experience, and I am grateful to all those who supported me along the way and to each and every person with whom I’ve met and exchanged ideas and hopes for inclusive economic growth on our continent throughout this process.

“I am thankful to have been given the chance to travel to so many parts of the continent – small states, fragile states, and large states across Africa – to feel the pulse of African leaders and peoples. I met with young people and women – Africa’s greatest assets, with small- and medium-sized enterprises, and with Africa’s business leaders. From rural areas to burgeoning cities, I saw vast opportunities for a greater and more inclusive Africa. I am hopeful and excited about the prospect of building on the great work of President Donald Kaberuka at the AfDB”.

Adesina gave assurance that “Together, we can build a stronger and more prosperous Africa, with smart infrastructure, energy for all, a strong private sector, new economic opportunities that will deliver quality jobs and hope for millions of youths and women, revival of Africa’s rural economies to lift many out of poverty, and regional integration for shared prosperity.

“The shareholders of the AfDB from African and non-African countries gave strong support, for which I am deeply grateful. Together, we will build a new Africa with inclusive and green growth.

“I commend all my colleagues who contested for the position, their countries, and supporters. They conducted great campaigns. They are all great assets to Africa.

“I would especially like to thank all the people of Africa for your prayers, your well-wishes, and your belief in me. I am truly humbled by the outpouring of support I have received from all across the continent. I promise to work hard with all African governments to deliver more inclusive economic growth across our beautiful continent”.

TI Wears Lifts Because He Doesn’t Have Height – Wendy Williams