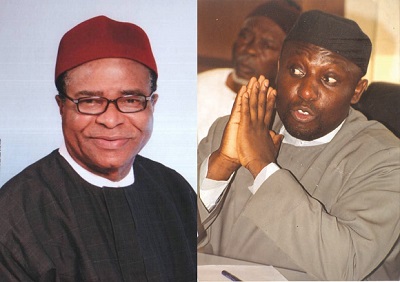 The Imo State Government has reacted to reports credited to a Senior Advocate of Nigeria (SAN), Chief Mike Ahamba that Governor Rochas Okorocha is threatening his life.

Ahamba is the lead counsel to Emeka Ihedioha, the Peoples Democratic Party candidate, who is challenging the election of Okorocha at the State Governorship Election Petition Tribunal.

We had earlier reported that Chief Ahamba in the press statement that he personally signed, claimed that during the last meeting the Governor had with traditional rulers in the state, he had stood up traditional rulers from Mbaise area and sent a threat to him through them, among other disturbing claims.

However, in a statement issued on Tuesday by Chief Press Secretary to the Governor, Sam Onwuemeodo, Okorocha denied the allegation.

The statement reads in part: “Governor Okorocha has never threatened the life of Chief Ahamba either directly or indirectly, and does not have any reason to do so. And Chief Ahamba knows that. He has only chosen to be a tool of cheap blackmail in the hands of some desperate politicians who wrongly believe that they have monopoly of political power and political offices in the state.

“For Chief Ahamba to come up with his dangerous claim twenty four hours to the commencement of hearings at the Election Petition Tribunal in the state calls for concern and deep reasoning.

“Chief Ahamba is a well-known lawyer in the state and even beyond. He is also highly respected both in the legal profession and outside the profession. But he does not in any way constitute any threat to the popular mandate given by Imo people to Governor Okorocha to govern them for the next four years”.

The statement noted that Chief Ahamba might have won many cases in court, such legal victories do not include election petition matters.

“He has no record of any legal success in election petition cases, and the current one he is handling for the PDP and its governorship candidate in the 2015 election wouldn’t be an exception”, it declared.

Onwuemeodo advised Mr. Ahamba to rather than raise undue alarm over fictitious threat to his life, he should be concerned with how he would convince the tribunal that Ihedioha, who won only five local Governments out of twenty-seven in the state had taken a wise step by challenging Okorocha’s victory in twenty-two local governments with convincing spread of votes in all of them, while seventy percent of the votes by the PDP candidate came from only three local Government areas in Mbaise.

“Chief Ahamba should be courageous enough to advice his client to withdraw his petition if he has seen that he has no valid claim to make with regard to his loss of the governorship election instead of raising suspicious alarm over his life just to heat up the polity”, the governor’s spokesman said.

The statement further urged Chief Ahamba to protect the name and reputation he has earned over the years and not allow “certain politicians” to rubbish such enviable credentials that make him tick and perhaps, put on him the toga of an attack dog, stressing that “he does not deserve such”.

Okorocha stressed that Ihedioha, who was the Deputy Speaker, House of Representatives in the Seventh National Assembly, has the means to hire all the best SANs in the country, and that is why threatening Ahamba’s life would be of no importance to any of the interested parties in the matter.

“For the sake of emphasis, Governor Okorocha has no problem with Chief Ahamba. As the lead Counsel to the PDP gubernatorial candidate, Chief Ahamba is only doing his professional duty which does not pose any problem to anybody with regard to the matter at the tribunal. He is neither the chairman nor a member of the tribunal, one could say he has a role to play. All these make the claim of his life being threatened by Governor Okorocha to be neither here nor there. It is not true and cannot be true”, the statement concluded.

The post Alleged Death Threats: Don’t Be A Tool In The Hands Of Desperate Politicians – Okorocha Replies SAN appeared first on INFORMATION NIGERIA.

14-year-old Bride Who Poisoned Husband, 3 Others Charged With Culpable Homicide