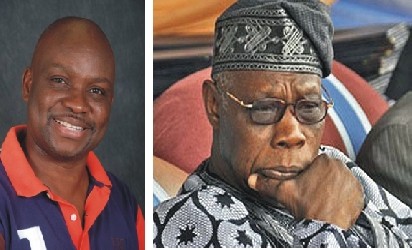 The Ekiti State Governor, Mr Ayodele Fayose has urged former President, Chief Olusegun Obasanjo to stop attacking the immediate past President, Dr Goodluck Jonathan.
The governor was reacting to the statement Obasanjo made at the 11th Convocation Lecture of Benson Idahosa University (BIU) Benin, Edo State at the weekend that Jonathan’s performance “in office will haunt the people of the South-South region for a long time to come”.
Castigating the Owu chief for the comment, Fayose said Jonathan is no longer the president of Nigeria and should be allowed to live a private life away from the mudslinging by elder statesmen like Obasanjo.
In a statement issued in Ado-Ekiti, the state capital on Monday by his Special Assistant on Public Communications and New Media, Lere Olayinka, the governor said the people of the South South had already shown their approval of ex-President Jonathan’s performance while in office by voting overwhelmingly for him on March 28 despite the gang-up orchestrated by Chief Obasanjo and his allies.

“Most importantly, Jonathan’s performance as a democrat has been widely acknowledged locally and internationally, particularly by President Mohammadu Buhari, who on many occasions acknowledged the role he (Jonathan) played in midwifing a peaceful and successful transition programme, thereby averting the feared crisis in the country.

“This is in contrast to Baba Obasanjo, who tried third term when he was about concluding his constitutional two terms. And who knows whether he would have tried fourth term if he had succeeded with his third term agenda?
“The reality is, assuming but not conceding that Jonathan performed below expectation, democratic governance that he established in Nigeria is more important than any other performance that Obasanjo alluded to”, Fayose said.

Speaking further, Governor Fayose urged the former president to stop running other Nigerians down, saying; “We are all stakeholders in the country Nigeria. It is wrong for any Nigerian no matter how highly placed to go about carrying himself around as the only honest and lover of the country”.

He added that “since Baba Obasanjo has openly destroyed his Peoples Democratic Party (PDP) membership card, he is free to go about seeking relevance in the All Progressives Congress (APC) without running anyone down”.

Fayose concluded by quoting a popular saying that people living in glass houses should avoid throwing stones, adding that Nigerians know those involved in the Halliburton scandal and people who are yet to be cleared of their alleged complicity in a scam like Halliburton, lacked moral rights to brand other people as corrupt.

My Man Is One Of The Best People I Ever Met...

Ole Gunnar Solskjaer Should Be Given Time At Man Utd –...