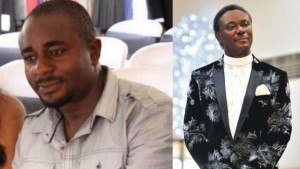 According to the Punch newspaper, Household of God preacher, Pastor Chris Okotie has responded to Emeka Ike’s claims that he is the one behind the plot to destroy his marriage.

In the publication’s report about the story it claims that Okotie has dismissed the claims of trying to split the actor and his wife as ‘rubbish’.

On September 2, Emeka Ike released an official statement claiming that the man of God was behind his marriage troubles.

“Pastor Chris Okotie just absolved my wife into his church without making any effort to get in touch with me. If as a pastor, your church member is having issue with her husband, and you failed to do anything to resolve it, what kind of pastor are you? When I called him, he refused to pick my call. He also failed to react to a text message I sent to him. Is that a man of God? Even, if you have a police case, they will make effort to hear from you before taking a position, not to talk of the church“

In July Emeka Ike’s wife Emma Ike granted an interview to The Nation newspaper where she spoke about her marriage troubles.

“The last time I wanted to speak with our children, it was my mother-in-law who picked the call and asked if I had read Exodus 21 which says that if I go, I shouldn’t return.”

She also said that Emeka took her last two children from her during the period of her mother’s burial in February. “He promised to bring them to me immediately I returned from my mother’s burial but he didn’t. He doesn’t allow me to speak with them anymore. They are now against me.“

Emma disclosed that she had to leave their matrimonial home because of domestic violence. “If I was still with him, I may not survive. I was 19-year old when I met him and he was the one who deflowered me. I see no reason I shouldn’t be treated with utmost respect. Due to physical torture, my health has been affected. There was even a time I thought I had chest cancer because I felt a lump on one part of my chest” she said.

Wiggins to race Tour of Flanders, Gilbert out

Buhari Is Committed To Nigeria’s Growth And Development – Igbo Youth...