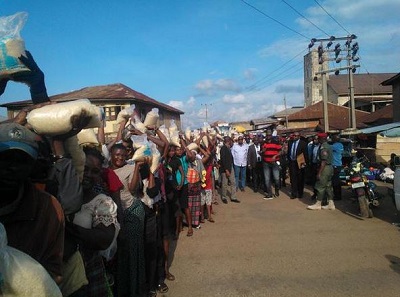 Ekiti State Governor, Ayodele Fayose, has vowed to sustain his his novel ‘stomach infrastructure’ project because of tough economic and social challenges confronting the people.

He spoke in Ikere Ekiti during the distribution of items such as rice, milk, groundnut oil, beverages and maggi to the people.

Fayose, according to a press statement by his Chief Press Secretary, Idowu Adelusi, in Ado-Ekiti, the state capital, said only healthy people could contribute to the development of their societies.

“We are all witnessing what is going on across the world. People are moving to places they think has greener pasture even at the risk of their lives. People from Eastern Europe are struggling to get to the West. Here in Ekiti, our concern is the welfare of the citizens.

“When we banish hunger, assist in the provision of good health care services, then we can talk of roads and other social infrastructure. A hungry man may not value a road that is tarred because his major concern first will be to have food to eat.

“We are not allowing paucity of funds to deter us. When we started last year, mockers felt the programme would fizzle out or die, but it has not and will not. We have held it thrice in Ado-Ekiti and now Ikere-Ekiti and it will go round the state”, he said.

Gov. Fayose said his administration would continue to touch the lives of the people in many positive ways, despite its lean resources.

The US Government Must Help Curb Corruption In Nigeria – Yemi...