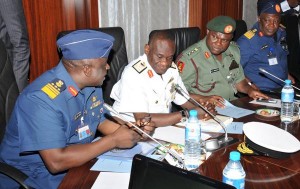 The Emir of Kano and former Governor of Central Bank of Nigeria (CBN), Sanusi Lamido Sanusi, yesterday, faulted what he called unhealthy rivalry among security agencies in the country in their fight against insurgency. He said if the trend is not checked, it could derail government determination to end Boko Haram activities by December.

The Emir said this at the second edition of Nigeria Security Exhibition and Conference held in Abuja, sponsored by the Nigerian Communications commission (NCC) and other agencies.

Sanusi, who was represented by a retired Assistant Inspector General of Police and the District Head of Albasu Kingdom in Kano State, Mr. Bashiru Albashir, said that such trend was not the way to go in tackling terrorism of that nature.

“I spoke about cooperation among security agencies. Police is a physical security, while Civil Defense is also physical security known and seen by everybody. But the Department of State Services, DSS, is undercover security.

“There must be opportunity for the two to complement each other. The DSS will get information and depending on how relevant the information is, if it is not sent to Police, they should pass it to the army.

“This understanding and cooperation is what will move us forward, not competing among themselves and saying I am superior to you. That will not help us go anywhere.”

He, therefore, advised the government to initiate purposeful programmes that will enable the country tackle corruption, poverty, injustice and ignorance, arguing that such steps would surely provide a lasting solution to the current insecurity in the country.

“Terrorism did not start from the air; there are breeding grounds like ignorance, poverty, injustice and corruption. If government is fighting insurgency in the field, in Sambisa Forest and other places, it must also address these fueling agents at the background.

“There must be purposeful programme to tackle corruption, which the present government is doing. Unless we are able to do these, it will take us time to stamp out terrorism.

“The intelligence unit must cooperate with the police so that we can tackle terrorism. What we need is prevention before striking and we cannot prevent the attacks without intelligence,” he said.

Avangate to Exhibit and Speak at Affiliate Summit West 2014