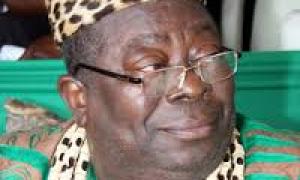 Former President Goodluck Jonathan has expressed sadness over the death of the chairman of the Benue State Traditional Council and the Paramount Ruler of Tiv Land, the Tor Tiv, Alfred Akawe Torkula.

He described the late Torkula as a reformist whose candor encouraged peaceful co-existence of different ethnic nationalities in Benue State.

The Tor Tiv, who was installed as the fourth Tor Tiv in April 1991, died on Monday at a private hospital in Gboko at the age of 71.

In a condolence letter to the deceased’s family and the Benue State Government, Jonathan said: “The late Tor Tiv was a great reformist and peace lover whose people-oriented leadership and candour ensured the establishment of peaceful co-existence in Tiv Land Benue State, and the entire region.

“He will also be remembered as a celebrated spiritual guide of his people, who not only served as a true custodian of Tiv’s rich culture and tradition, but also worked diligently for the creation of more districts in his domain.

“He will indeed be missed by his family, the good people of Tiv Land, Benue State and the entire nation”.

APC Cares Only For Their Selfish Political And Pecuniary Interests –...

Basketmouth Uses 6 Phones When In UK, 8 Nigerian Numbers And...