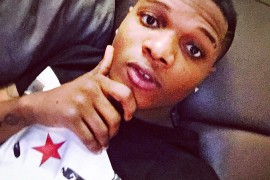 The ‘Final (Baba Nla)’ singer started dating Binta of two years ago off and on. Last year she found out that she was pregnant and told Wizkid. The pop star reportedly said he will accept the child, be a better father this time around, and care for him.

In 2011, Wizkid fathered a son Boluwatife with Oluwanishola Ogudugu but wasn’t quick to accept his son.

Speaking to The Shade Room, Binta Diamond Diallo said Wizkid has hidden the fact that he has a new son from his fans, and has not yet seen his son. She also said that he hasn’t shown much interest to his new son. Binta wants him to step up to his responsibilities.

On Monday, January 25, 2016 Wizkid denied that he fathered a child with Binta Diamond Diallo.