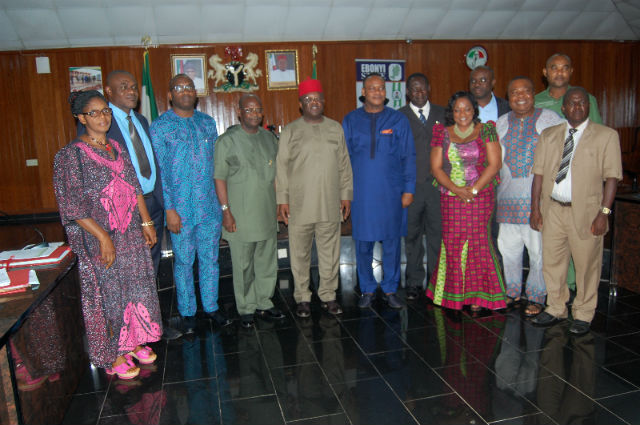 Addressing members of the two committees at the Government House, Abakaliki, Umahi directed them to work assiduously to ensure that the rural electrification projects embarked upon by his administration in six local government areas is ready for inauguration on 15th November.

He also ordered that those of the remaining seven LGAs be ready for inauguration on 30th November, 2016.

The governor said, Through the SDG, we have embarked on the implementation of a number of projects in six Local Government Areas but very significant among them is the rural electrification project , especially street light . I am directing that that job must be inaugurated by 15th of November. So you have to write it down and the other job for the remaining seven LGAs must be ready by 30th of November. ”

He advised the LG caretaker chairmen to do everything within their powers to ensure that the projects sited in their areas were protected.

Engr. Umahi also expressed happiness over the cleanliness of Abakaliki, the state capital, saying the city would be made more beautiful during Christmas.

“Since, the Secretary to the State Government doubles as the Commissioner for Environment now, he has to start looking at the possibility of decorating the city ahead of Christmas. I must express my pride in the SSG over what they are doing in the town and I think everybody must see a very clear difference over the sanitation of the capital city,” the governor added.

He disclosed that the African Development Bank had indicated interest to fund the Abakaliki Ring Road project and directed the SSG and the Commissioner for Solid Mineral, Sylvanus Nwakwaegu, to prepare to defend ”our position in the mining programme coming up between 24th and 29th of this month.”

Amazing! This Pretty Lady Was Once A Man [PHOTOS]

Jay-Z Hangs Out With Floyd Mayweather