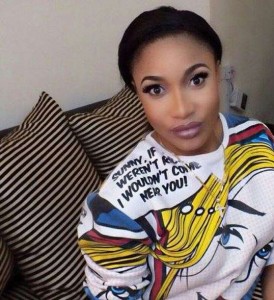 Tonto Dikeh has had enough of Speed Darlington’s public affection.

The Internet sensation dropped a tweet about his love for Tonto Dikeh and the actress was having none of it.

He tweeted, “Tonto Dikeh is my one and only sweet art. I love her so much.” To which Tonto responded, “Do I look like an artwork or do you mean sweetheart. If so, I hate scorpions and you are even their King.”

The movie star who recently announced herself as a born again Christian, says she’s working on taking off all the tattoos on her body.

The singer shared a post recently saying, “I’m soaked in Gods Strength, No weapon formed fashioned against me or my son or my workers can/Shall Prosper In Jesus Name Amen..”

Fans were, however, quick to remind her that a ‘child of God shouldn’t be covered in tattoos.’ She replied by saying she was working on removing them.

Families of the estranged couples met in PH, River state to dissolve the traditional marriage.

Emir Of Gwoza’s Murder, Declaration Of War On Traditional Institutions –...

PSG Will Be Ready For The UCL – Thomas Tuchel