In what seems to be a reprisal attacks from Russia on the United States, Russian government has angrily reacted to the sanctions imposed on it by the former Obama administration and another round of sanctions imposed by the US Congress.

In a reaction, the Kremlin on Friday ordered the United States to cut hundreds of diplomatic staff in and said it was seizing two U.S. diplomatic properties.

Moscow’s decision, which had echoes of the Cold War, was announced by the Foreign Ministry a day after the U.S. Senate overwhelmingly approved new sanctions on Russia. The bill now passes to President Donald Trump for final approval.

Russia had been threatening retaliation for weeks. Its response suggests it has set aside initial hopes of better ties with Washington under Trump, something the U.S. leader, before he was elected, had said he wanted to achieve.

The new sanctions were in part a response to the agencies’ findings that Russia did meddle in the election, and to further punish Russia for its annexation of Crimea in 2014.

President Vladimir Putin had warned on Thursday that Russia would have to retaliate against what he called boorish U.S. behavior, and Dmitry Peskov, his spokesman, told reporters on Friday that the Senate vote was the last straw.

A top White House aide said on Thursday that Trump might veto the legislation in order to push for a tougher deal. But the bill is expected to garner enough support in both chambers to override any veto.

The Russian Foreign Ministry said the United States had until Sept. 1 to reduce its diplomatic staff in Russia to 455 people, the number of Russian diplomats left in the United States after Washington expelled 35 Russians in December.

It was not immediately clear how many U.S. diplomats and other workers would be forced to leave either the country or their posts, but the Interfax news agency cited an informed source as saying “hundreds” of people would be affected.

A diplomatic source told Reuters that it would be for the United States to decide which posts to cut, whether occupied by U.S. or Russian nationals.

An official at the U.S. Embassy, who declined to be named because they were not allowed to speak to the media, said the Embassy employed around 1,100 diplomatic and support staff in Russia, including Russian and U.S. citizens.

The Russian Foreign Ministry’s statement said the passage of the bill confirmed “the extreme aggression of the United States in international affairs”.

“Hiding behind its ‘exceptionalism’, the United States arrogantly ignores the positions and interests of other countries,” it said.

“Under the absolutely invented pretext of Russian interference in its domestic affairs, the United States is aggressively pushing forward, one after another, crude anti-Russian actions. This all runs counter to the principles of international law.”

Most U.S. diplomatic staff, including around 300 U.S. citizens, work in the main embassy in Moscow, with others based in consulates in St Petersburg, Yekaterinburg and Vladivostok.

The Russian Foreign Ministry said it was also seizing a Moscow dacha compound used by U.S. diplomats for recreation, from Aug. 1, as well as a U.S. diplomatic warehouse in Moscow.

The former Obama administration seized two Russian diplomatic compounds – one in New York and another in Maryland – at the same time as it expelled the Russian diplomats in December.

Putin said at the time that he would wait to see how Trump handled the issue before responding, and Trump praised his restraint.

The two men met for the first time at a G20 summit in Germany this month in what both sides described as a productive encounter, but Russian officials have become increasingly convinced that Congress and Trump’s political opponents will not allow him to mend ties, even if he wants to. 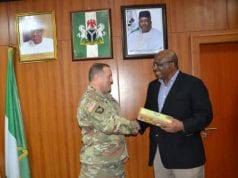 Sane To Bayern Munich Will Be A Good Move – Joachim...

Exercises Are Part Of My Daily Lifestyle – Funsho Adeolu