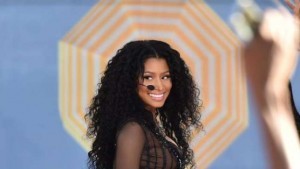 Earlier this week, 6ix9ine posted $150,000 bail in New York on the condition that he head to Houston, Texas to answer for a misdemeanor battery charge stemming from a January incident in which the 22-year-old rapper allegedly choked a 16-year-old boy at a mall in the city. 6ix9ine was picked up by the NYPD on July 11, and spent a few days in Rikers before being granted bail. Despite the legal troubles, it appears the Brooklyn artist is still very much interested in dropping new projects.

Yesterday, he posted a photo of his mug shot with a caption teasing “one last music video” before going to jail “forever.” While he’s likely kidding about the “forever” part, he’s probably serious about the video. He recently teased a remix to his single “FeFe,” originally released in June, that appeared to feature a woman’s voice. Speculation from forums and fan accounts think it could be Nicki Minaj, who would also feature in the alleged upcoming music video. The remix would supposedly be produced by Murdabeatz and drop this Sunday.

One of the rapper’s fan accounts fanned the collaboration flames by insinuating in an Instagram post that some have thought Nicki can be heard on a song 6ix9ine previewed on his IG recently. A Minaj fan Twitter reposted the video teasing the remix from 6ix9ine’s stories, repeating that it allegedly features Nicki and the supposed Sunday release date.

If you’re still skeptical, TMZ has another potentially interesting tidbit: 6ix9ine just spent $95,000 on a My Little Pony chain covered in diamonds and featuring some of his iconic rainbow hair styled by his actual hairdresser. Why is this important? The rapper ordered the chain from Miami-based SHOP GLD a few weeks ago, but he reportedly called them on Tuesday asking for a rush delivery since he needed it for a music video with Nicki Minaj.

Neither 6ix9ine nor Nicki have confirmed or denied the rumors.

The Nigerian Army’s Action On IPOB Is In Order – Okoi...

10 Things A Lot Of People Didn’t Know About Dagrin

Jamie Vardy Set To Get Married

Press Release > TrueShip Explains Why U.S. Should Be Copying China...