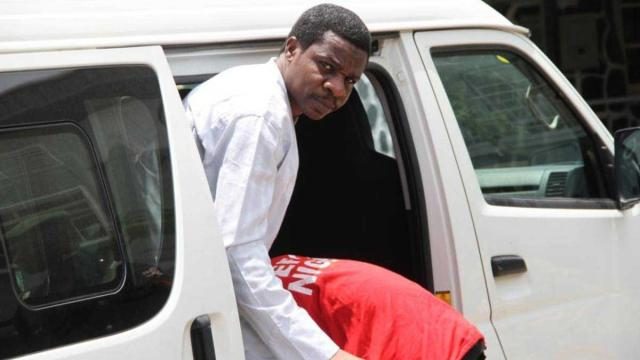 One of the counts reads: “That you, Ibrahim Abdulsalam, Adegorite Olumuyiwa, Agbolade Segun, Clara Aliche, Joy Ayodele Adegorite, Randville Invesment Ltd And Multeng Travels And Tours Ltd, between the 1st day of January and the 30th day of December, 2015 within the jurisdiction of this Honourable Court, did commit an offence, to wit: conversion of the sum of N336,803,308 property of NAMA, which sum was derived from stealing, and thereby committed an offence contrary to Section 15(1) of the Money Laundering (Prohibition) (Amendment) Act, 2012 and punishable under Section 15(3) of the same Act.”

At the resumed hearing today, a prosecution witness, Nurudeen Bello, told the court that the total sum of N2.8billion was transferred from the Agency between 2013 and 2015 to different companies’ accounts for the personal use of the defendants.

“The companies that received part of the money included Multeng Travel and Tours, Multeng Engineering and Multeng Aviation, among others.

In his further testimony, Bello also said that over N100m cash, mostly in tranches of N3m, were withdrawn from Randville by Agbolade.

Bello said the balance in the account of Randville before the fraud was perpetrated was N8.7million, adding that “when the unlawful act was carried out, the credit turnover of Randville Investment Limited was N3.6billion while the debit turnover was also N3.6billion.”

The prosecution counsel, Oyedepo, through the witness, sought to tender in evidence before the court the statements of the fourth defendant dated February 15, 16, 17, 18, 29 and March 12, 2016.

However, when the prosecution counsel, Oyedepo, sought to tender the statements of the first, second and third defendants, their counsels objected to the admissibility of the statements by the court.

Counsel to the first defendant, Etti Olawuni, objected to the admissibility of his client’s statements dated February 12 and March 6, 2016 on the grounds that they were not made voluntarily.

He therefore urged the court to conduct a trial within trial to verify the statements of his client.

Counsel to the seventh defendant also opposed to the admissibility of the statements of his client, saying, “the statements were purportedly made.”

He, therefore, also asked the court to conduct a trial within trial to verify the statements.

Also, counsel to the second defendant opposed the admissibility of the statements of his client on the grounds that the prosecution had failed to front- load the statements amongst the “proof of evidence”.

In response to the arguments of the defence counsels, Oyedepo told the court that the statements of the first defendant was taken voluntarily and that there were no confessional statements made by him that could warrant a trial within trial.

Regarding the second defendant’s statements, Oyedepo applied to make copies of the statements available to the defence counsel after the proceedings. His application was granted by the court.

However, Oyedepo admitted that the statements of the seventh defendant were contentious.

“I will not oppose the prayer of the defence counsel to the seventh defendant for trial within trial,” he said.

In his ruling, Justice Kuewumi held that “trial within trial shall be conducted to verify the statements of the seventh defendant”.

The Judge further held that he would need time to peruse the statements of the first defendant before ruling on it.

READ  Amotekun Will Not Be Politicized – Ogun State Government

Consequently, Justice Kuewumi adjourned the case to June 14, 2019 for the commencement of trial within trial and also for ruling.

Ernst & Young Announce Mindgrub’s Todd Marks as a Finalist for...

OBJ Sent Me To Prison For No Reason – Bamaiyi