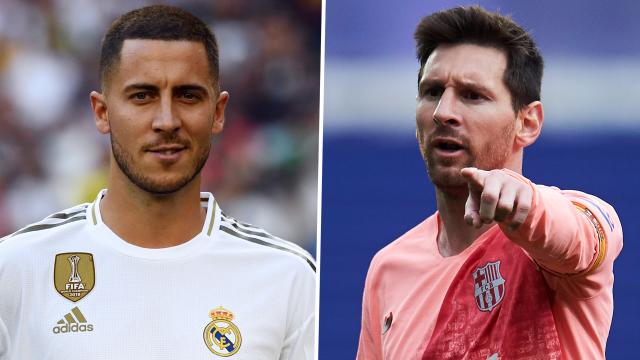 Ahead of the crunch clash vs Real Madrid on Wednesday, Lionel Messi has talked about why Barca seem to play better against their rivals when they play at Santiago Bernabeu.

Both teams will face off at Camp Nou in midweek, with just goal difference separating them in the La Liga after 16 games this season.

Barcelona presently has a record of 4 successive victories at the Bernabeu, and Messi believes they have the several spaces they generate away from home to thank for it.

He added that Hazard is a quality footballer who can unbalance defences, even if he is different from Ronaldo.

His words, “When we play at the Bernabeu, many more spaces are generated. They attack us more because they have the obligation as the host team and people push them for that.

“At the Camp Nou, they play another type of match, sitting a little further back, they are closer together and hit on the counter-attack because they have very fast players upfront.

“At the Bernabeu, we play 90 minutes equally. Here the game becomes more locked and is more complicated.”

On Hazard getting benched, “Hazard has a lot of quality. He is a different football player who can unbalance [defences], but I think he is different to Cristiano, with different characteristics.

“It is very difficult to replace Cristiano, but Hazard is also a great player.”

On the coach’s selection at Barcelona, “Actually I think we are all very important. There are times when it’s another teammate’s turn to play and I think you have to take it in the best possible way, being aware that the most important thing is that everyone in the dressing room feels important because we need everyone motivated to achieve the targets.”

Laugh Matters: Read Carefully Through The Top 15 English Blunders By...

We Are Not Negotiating With Manchester United – Florentino Perez