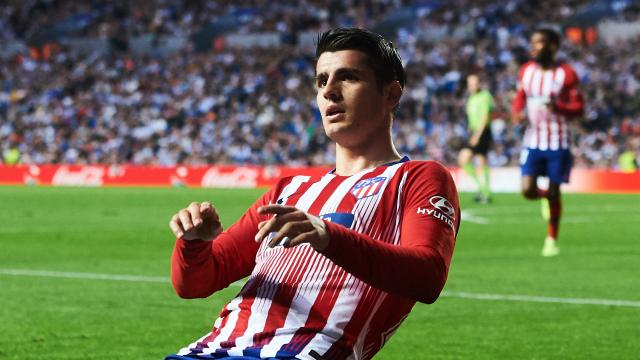 Atletico Madrid striker, Alvaro Morata has come out to reveal his regret at leaving the club’s academy when he was climbing through the youth ranks.

Morata recently revealed that the pressure he felt in the academy at the time led to his exit in addition to not starting enough games.

According to him, he actually wanted to play for the Atletico first team early in his career but it has happened eventually and he is happier than ever.

He added that Chiellini, Van Dijk and Sergio Ramos are the toughest defenders he has faced because they always make games difficult for him.

His words, “When I was a kid, I was a ballboy at Atletico,”

“Then I went through a period where I didn’t enjoy it so much. You know, it’s the path a young kid goes down to be a professional.

“You start with agents, sponsors. I felt a lot of pressure, I wasn’t starting games.

“I thought about leaving. Then I spent a year at Getafe and, you know what, it was an amazing year. Then I went to Real Madrid, but my dad and I used to go to the Vicente Calderon and I dreamed of playing there.

“However, unfortunately, I had to play there for other clubs and not with Atletico, but I always wanted to. What I have lived stays, but now I am happier than ever.”

On tough defenders he has faced, “[Giorgio] Chiellini, I don’t know if he does it on purpose, but when he meets me, he always destroys me,”

“Sergio Ramos is also a tough defender, while when you go against [Virgil] Van Dijk it seems like you hit a mountain.”

I Will Call The Shots At Real Madrid – Zidane

We Will Resist Any Attempt To Arrest GEJ – IYC