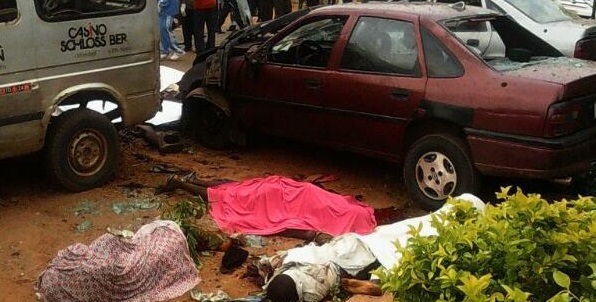 No fewer than three people have been killed and one person injured by bandits at Kamaru village of Chawai Chiefdom in Kauru Local Government Area of Kaduna State.

An eyewitness reported that four attackers arrived at the victims’ compound and an argument ensued, and in the process, the assailants opened fire on the victims.

Confirming the incident, the Kaduna State Commissioner for Internal Security and Home Affairs, Samuel Aruwan, said that investigations indicate that the gunmen were criminals from a neighbouring state who crossed over into the village to carry out the heinous act.

He explained that troops responded to a distress call from the village and arrived at the location to find three persons dead and one injured.

In a separate development, troops reported the arrest of a resident suspected of poisoning cattle in Gindin Dutse village of Jema’a Local Government Area.

Two cows had died in the village after eating some apparently poisoned cassava beside a farm.

Troops trailed and arrested the owner of the farm, who is now undergoing preliminary investigations.

Meanwhile, Governor Nasir El-Rufai has expressed shock and grief at the report of the attack, condoling with the families of the deceased and praying for the repose of their souls.

The governor further tasked security agencies to ensure a thorough investigation into the incident.

Ambode Has Turned Lagos To A Construction Site – Chief Ologunde

I Am Ready To Give Part Of My Wages To Health...