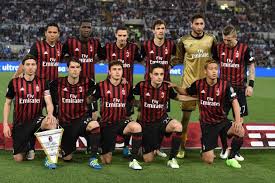 AC Milan manager, Gennaro Gattuso has said his team were “embarrassed” by Lazio in their 1-0 Coppa Italia semi-final defeat yesternight.

Lazio ran out 1-0 aggregate winners thanks to Joaquin Correa’s second-half goal as they got their revenge for a recent Serie A loss and last season’s cup exit to AC Milan.

After this latest loss, the Italian giants have won only once in their past seven matches in all competitions, which means they might not qualify for the UCL if things continue this way.

Gattuso said, “We held out well in the first half, but after half-time, they had three chances and we did not move enough off the ball,” Gattuso told reporters.

“We’re in a difficult moment. We’re struggling and we need to turn the page because on Sunday there’s another must-win game.

“We’ve got to try to understand why we’re in this negative period. Lazio deserved to qualify [for the final]. Our fans deserved more.

“Sometimes you change just to do something different, to improve the performance, lift the team. Something isn’t working and we’ve been struggling for the past month.

“I don’t think that it is just a physical issue, but also mental and tactical, as we are performing below our potential.

“It’s not an issue of systems or individuals, though the whole team has taken steps backwards. We are playing with the handbrake on and paying a price.

“We had tried to play a life-or-death game but it didn’t work. There’s no point denying it, we were embarrassed and have to look forward.

“Lazio were coming from a difficult period too, but we made it easier for them. We’ve got a month left in the season and it is our duty to give our all.”

Raymond Dokpesi Is The Foremost Dynamic Person To Be PDP Chairman...

I Did Not Think I Was Going To Win Anything At...