Award-winning 20-year-old fantasy genre author & CEO R.J. Tolson’s National Literacy Campaign and novel, “Chaos Chronicles Book 1: Zephyr The West Wind,” are not only igniting a passion in America’s youth to forge new paths, excel beyond their limits and “Never Give Up” on their dreams but receiving Star Power endorsements. 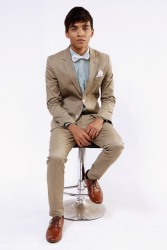 RJ Tolson, a Whittier College junior and English & Political Science double major, explains “I’m honored to speak to the students. Ms. Tyson is a uniquely talented actress who’s been a trailblazer and inspiration for so many. Meeting her last year and having an opportunity to share my interests, goals and accomplishments was special for me and my grandfather. He recalls what a force Ms. Tyson was during the Civil Rights Movement. She’s given back in a way I hope to someday.”

At only 18 years of age, multi-lingual RJ Tolson became CEO of a multi-divisional corporation, founded an international charity, Forever Trust, which supports 58 U.S. based international relief and development organizations, and released Chaos Chronicles Book 1: Zephyr The West Wind. Less than a year later, Tolson, a 2013 Beverly Hills Book Awards Finalist and National Indie Excellence Book Awards Finalist for Zephyr The West Wind, ignited a passion in America’s youth to forge new paths and excel beyond their limits. In fact, in his April 28, 2014 nonfiction debut, Project Limitless Volume I: The Success Initiative, which trended on Twitter alongside iconic Harry Potter Series creator, J.K. Rowling in its first week, Tolson explains how to forge such paths and excel. Tyson Community School Educational Media Specialist, Lora Tazewell, commented regarding the young RJ Tolson, noting “Ms. Champagne [school principal]…would be delighted for us to host Mr. RJ Tolson’s visit on May 16, 2014.”

Cicely Tyson School of Performing & Fine Arts is a specialty magnet public school that serves students in grades pre k-12 in East Orange, NJ as part of the East Orange School District. The school teaches core disciplines while focusing on the creative potential of students.

Facebook messenger soundmojis: Step by step guide on how to use