“ALTERGEIST” Launches “Demand My City” Contest for Horror Sci-Fi Film’s Theatrical Premiere. Are You Afraid? That’s What They Like. 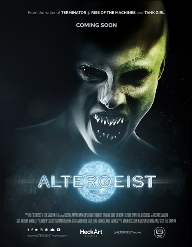 Los Angeles, CA, May 14, 2014 –(PR.com)– ALTERGEIST will hold a premiere screening in a U.S. city chosen by online voters who “Demand My City.” Tedi Sarafian, writer of Terminator 3: Rise of the Machines and Tank Girl makes his feature directorial debut with the horror/sci-fi thriller ALTERGEIST. Sarafian, cast members and the producers will attend the premiere screening in the city with the most online votes, and certain lucky voters will be invited to the premiere party, announced Aaron Heck, President HeckArt Studios.

Links to all of the ALTERGEIST social pages are available on the film’s website for fans to join the conversation and 2 grand-prize winners will each receive a pair of tickets to the premiere screening and party plus airfare and one night’s accommodations. 25 of the voters in the winning city who are most active on social media supporting ALTERGEIST will be invited to the post-premiere screening party plus one guest each! Also, five of the top social media supporters from any city will receive autographed ALTERGEIST posters. Abbreviated contest rules are below. For complete rules and details visit the film’s website at www.ALTERGEISTmovie.com

Last month, ALTERGEIST kicked off its festival run at the prestigious BIFFF 2014 (Brussels International Fantastic Film Festival) to an enthusiastic and vocal audience and at the Berlin Market the film received several offers from major territories for distribution, which are under consideration. Producer Aaron Heck is also considering an offer for a unique and creative U.S. distribution plan, as well as all other options for domestic distribution.

In ALTERGEIST, King’s Ransom Winery is widely considered one of the most haunted places in North America due to a long history of bizarre deaths from gruesome suicides and murders, along with suspicious fires, and strange otherworldly phenomena which appear with disturbing frequency. Led by Theresa Augland, a group of six paranormal investigators conducts a search for evidence of the other side and begin to witness strange happenings. As long-buried memories and deep-seated fears bubble to the surface, they are terrified to learn that even the winery’s ghosts fear the truly sinister presence that has haunted the family estate for generations.

In reality, perhaps most disturbing, however, is the fact that these are all based on true events.

About The Winery
ALTERGEIST was shot entirely on location at the historic Korbel Winery, established in 1882 and derives inspiration from true life events at the winery. At the turn of the century, a woman took her own life in the attic of the historic Korbel House, which served as the set for the old Till family homestead in ALTERGEIST. Having scrawled mad writings across the walls of the attic, this formerly reserved cook’s wife was clearly struggling against dark forces she could not understand. In the end she turned to suicide as the only means of escape. Grounds keepers at Korbel have experienced strange happenings in and around this house, and some refuse to approach it at night. The cast and crew also felt the presence of spirits from the winery’s past, both in the house and elsewhere on the grounds. The white lady of the Korbel house, strange orbs of light that move through the redwood forests at night, and stories of other tragic deaths in the area all served as inspiration for the twisted history of King’s Ransom Winery in ALTERGEIST.

Exclusive photos, gifs, and clips are available by request and Writer/Director Tedi Sarafian and Aaron Heck are available for phone interviews and in-person interviews at Cannes through May 25. Please contact: david@robersonpr.com 310-925-8786

No Purchase Necessary. Promotion begins at 12:01 a.m. PT on 5/14/14 and ends at 11:59 p.m. on 9/15/14. To enter, visit www.ALTERGEISTmovie.com, submit entry form on the home page and start networking. Prizes: (i) Twenty-five (25) persons will win two (2) tickets to attend ALTERGEIST Premier Party (ARV per ticket: $10); (ii) two (2) persons will win two (2) tickets to attend ALTERGEIST Premier (ARV per winner $2,000.00); (iii) five (5) persons will receive autographed ALTERGEIST posters (ARV per poster: $5.00). Total ARV: $4,525.00. Odds of winning depend on the number of eligible participants who selected the Premier Location during the Promotion Period. Eligibility: must be above the age of majority in your state of residence, legal U.S. resident, and possess valid email address at time of entry. Void where prohibited by law. Promotion is subject to the Official Rules available at: www.ALTERGEISTmovie.com. Limit one (1) entry/vote per authorized e-mail account holder per day during the Promotion Period. Promotion and Official Rules governed by the laws of the State of California. Sponsor is Sighting LLC, 8028 Selma Ave., Los Angeles, CA 90046.

My Husband Is My Friend And Foundation – Mercy Aigbe

2023 Elections: Agbakoba writes INEC Chairman on the Interpretation of Section 134 of the Nigeria’s Constitution

Did Burna Boy Jilt His Longtime Girlfriend For A White Lady?!?