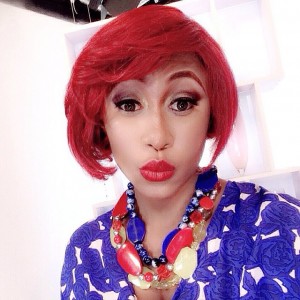 Didn’t they say respect is reciprocal and never throw stones in a marketplace?

The Northside Entertainment singer Cynthia Morgan has finally revealed what actually transpired between her and HKN act Davido.

In a recent interview with punch Cynthia Morgan revealed the real reason behind the drawn beef between them was because Davido called her names first.

Read her reply below:

“I do not want to talk about my spat with Davido or shed more light on it because I do not really know what to say. People who actually care tried to find out what really transpired between us. Davido called me names on Snapchat and I retaliated. When you say something to me, I give it back to you if I do not like it. Unfortunately, people did not hear my own side of the story before they reached their conclusions. I do not really have any problem or beef with Davido. He called me names and I called him names too. He started the whole episode by calling me a Malu, which means cow. I do not tolerate things like that from anybody”

However, The dancehall singer called the HKN act a ‘fuck boy’, and mimicked his hoarse voice. She also took shots at Davido’s label mates.

Cynthia says she hold no grudge in her heart and also debunked the spreading rumour about her crush on Davido.

“I do not know how people came up with the idea that I have a crush on Davido. I cannot remember ever saying that. I like his music artistry but I do not have a crush on him” she added