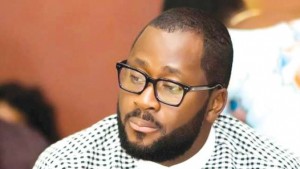 The popular slogan among Ghanaians “you have met your meter” seems to have manifested in the life of controversial Counselor Lutterodt.

Popular Nigerian actor Desmond Elliot has slammed him on some immoral speech he made at a Christian gathering in Accra just recently.

The two were said to be at the 2018 Stars in Worship where Lutterodt decided to talk about sex and orgasm.

According to a report, Lutterdot said orgasm was very important not only during sex but also in the worship of God.

According to him, anyone who faced challenges in their sexual life was bound to face challenges is his spiritual life because they two were connected.

Lutterdot reportedly added that the process of worshiping was the same process one goes through during sex, demonstrating his speech by touching his body on the stage.

However, Desmond Elliot felt Lutterdot had gone below the belt with his speech, and called him to order.

The actor who seems to be offended by the way and place Lutterodt made his speech felt it was unacceptable.

He lamented that the platform to worship God together as movie and music stars was not appropriate for the controversial counselor to make such immoral speech, and wondered how he could even make such comments.

The top Nigerian actor said he was never aware of the sexual claims Lutterodt was making, stressing that there would be trouble in West Africa if there were ever two of his kind.

“We can only have one of your type in West Africa. Honestly, if we had two, there would be trouble,” he added.

While Desmond complained, Lutterdot stood watching him and intermittently managed to smile showing that he had indeed ‘met his meter’.

Meanwhile, George Lutterdot has rode on this path for fame in Ghana over the past months.

He has been criticised and mocked by many for trying to use controversies for fame.

In an earlier report, a close friend exposed him, saying Lutterodt had long intended to create such controversies for the purposes of becoming popular.