Excitement builds up for glo-caf awards 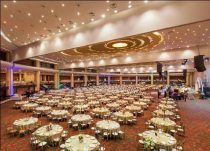 Lagos, Nigeria’s economic and commercial capital is gearing up for probably the first biggest football event of the year, 2013 Glo-CAF Awards.

The ceremony that will honour distinguished personalities for their exploits for the year 2013 will take place on Thursday, January 9 at the Eko Convention Centre in Lagos.

The event is the talk of town with billboards, flyers and all spaces around the city adorning messages related to the event. For both the print and electronic media, the award dominates the pages of newspapers and programmes both on radio and television.

Apart from being a night to celebrate sporting excellence, the show will also showcase superb and first-class entertainment from outstanding entertainers across different continents.

Since Globacom took over the sponsorship of the CAF Awards in 2005, football has always fused with music to blend the celebration of football excellence with the best of entertainment.

Nigerian talented performer and multiple award winner, D’ banj, who is also a songwriter, will be on hand to show the audience why he is deservedly called “The Entertainer.”

The masked one and Afro-Calypso originator, Lagbaja, will also perform on the night as well as Beninois Zeynab, who is known for her unique style and refreshing brand of entertainment.

Another mega act to thrill on that night is Africa’s sensational pop twins, P-Square. The identical twin brothers will entertain the crowd with their numerous hits and highly captivating dance moves.

South African enigmatic singer Lira, who redefined the industry with her 2006 album, “Feel Good” is also on the list of performers. Another scintillating performer billed to mesmerize guests at the ceremony is Ghanaian songstress, Sherifa Gunu who has been hailed by many as a crowd puller and a real performer with traditional zest.

A swing act from Germany, Marieke Koch, will also perform at the event just as Pole Rangers, which consists of German duo, Eike von Stuckenbrok and Remi Martin.

Ugandan comedian Patrick ‘Salvado’ Idringi who is gradually becoming a house hold name across Africa, will complement the evening with hilarious jokes.

Surely, with such a motley collection of superstars, quintessential performers and unusual entertainment, the GLO-CAF Awards Night promises to be so much fun!