A fierce battle has erupted for the soul of Kwara State All Progressives Congress, APC, as claims and counter claims continue over the purported removal of the State caretaker committee chairman, Bashir Omolaja Bolarinwa by a faction of the party.

TheInfoStride reports that, on Monday, a faction of the party reported that Bolarinwa, who was appointed by the national body of the party led by Buni led committee, had been removed and replaced by Abdullahi Samari Abubakar, the deputy chairman.

However, on Tuesday, January 12, 2021, another group of stakeholders, denounced the purported removal of Bolarinwa, “warning of dire consequences.”

They insisted and affirmed that “Bolarinwa remains the only recognised and duly sworn in caretaker committee chairman of our party, in line with the NEC resolution E December 8, 2020, and subsequently sworn in on December 11, 2020, in Abuja, with the rest of his colleagues from other states across the federation.”

“We thus, by this release denounce the purported removal as a baseless rumour, which holds no water and at best, the figment of the imagination of the peddlers, who are hellbent on hijacking the party’s structure through the back door,” the stakeholders added.

Our Correspondent in Ilorin reports that, a letter dated January 4, 2021, written to Abdullahi Samari Abubakar, which announced his appointment has circulated widely.

The letter signed by the national secretary, Senator John James Akpanudoedehe, caretaker/extraordinary convention planning committee of APC, claimed that Bolarinwa was removed on the ground of anti-party allegations.

It reads in part; ” Please kindly be notified that, following the allegations of anti-party levelled against the erstwhile chairman of our party in Kwara State, and his purported suspension by his erstwhile executives, the National Chairman, Caretaker/Extraordinary Convention Planning Committee (CECPC) has directed that I convey to you, the approval of the CECPC of your appointment as the chairman caretaker committee of our party in Kwara State, pending the outcome of investigation into the matter.

“By this appointment, you are to superintend over the affairs of the party in Kwara State forthwith.

“Your appointment is in furtherance of the resolution of the NEC of our party arising from its meeting of 8th December, 2020,” the letter added. 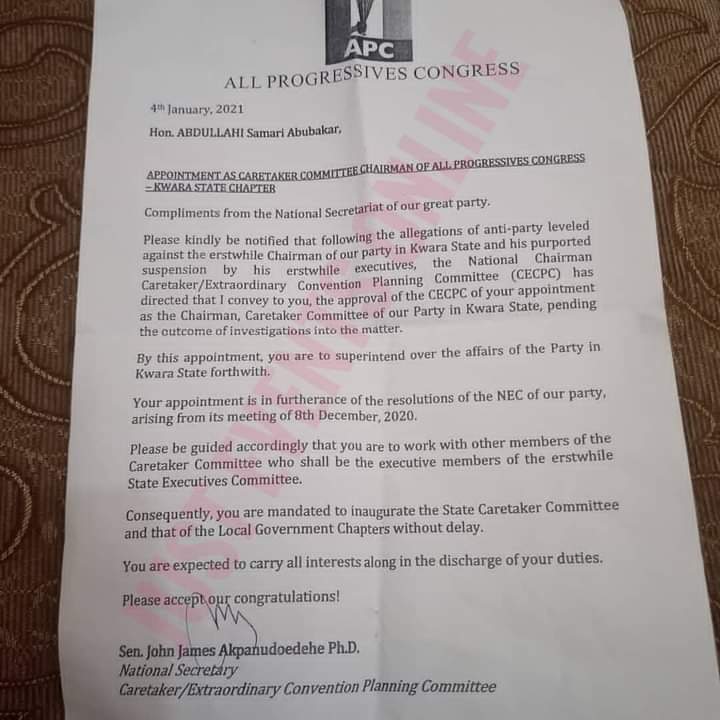 Rivers PDP Sponsors 50 Stakeholders To Brazil, Prepares To Take Over...