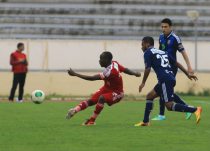 Holders Ahly crashed out of the 2014 Orange CAF Champions League after a shock 3-2 home loss to Ahly Benghazi of Libya on Saturday night in Cairo.

The stunning result saw the Libyans seal their first ever place at the lucrative mini-league stage as they progressed 4-2 on aggregate.

The Egyptians dropped down to the second-tier Orange CAF Confederation Cup, missing out on a historic hat-trick of titles in Africa’s premier continental club championship.

While the result served an infamous welcome for new Ahly Chairman Mahmoud Tahir, elected on the eve of the game, the ‘Red Devils’ misery was further compounded after right-back Ahmed Fathy was sent off mid-way through the second half.

On the back of a lone goal loss in the first leg in Tunis, Ahly needed just two goals to go through and got off well with raids into the visitors half. Burkinabe-import Moussa Yedan blasted wide the first opportunity of the game on 16 minutes, with a poor shot from his unpopular right foot.

Six minutes later, Ahly Benghazi goalie Wisam El Boudi denied the hosts the opener with a stunning save from Abdallah Said’s superb half volley, after Fathy had set him up.

On 38 minutes, Said squared defender Mohamed Naguib, who fired in from close range to break the deadlock.

The second half was a bitter story for the holders and Farag Abdel Hafiz put the visitors in the lead for the first time on 52 minutes with a blistering shot that beat Ahly goalie Sherif Ekramy.

READ  Playing Regularly At MUFC Is Important For Me - Bailly

Six minutes later, Moataz Al Mahdy took the game beyond the reach of the hosts with a curling shot from close range that left Ekramy with no answers.

Few minutes later, Ahly’s hopes of a coming back was dealt a huge blow after Fathy was given marching off orders for a tackle on Farag. Ahly fought back and Mahmoud Hassan ‘Trezeguet’ pulled one back heading home on 75 minutes, but it was all their effort could land them.