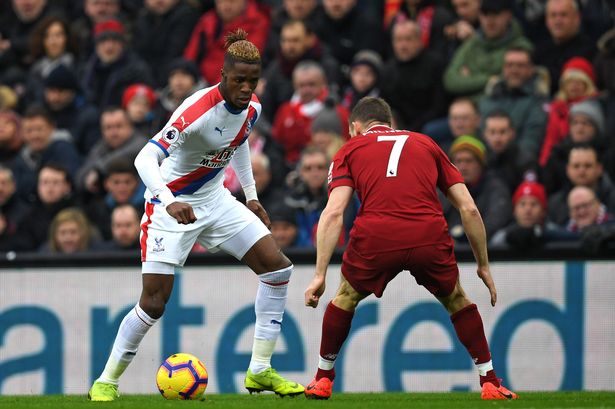 Crystal Palace coach, Roy Hodgson has come out to back Wilfried Zaha to continue his goalscoring run ahead of the clash vs Wolves tomorrow.

Roy recently revealed that Zaha is an excellent player who has so much to give the club on the pitch.

According to him, the English forward has obviously made a conscious effort to work harder on scoring goals and he hopes he can keep it up.

He added that the goal Zaha scored vs Fulham gave him enormous pleasure and he is sure that the player was also proud of the moment.

His words, “We’ve got four very good front players at the moment, so whoever plays up there alongside him, he’ll have a good foil.

“I just think Wilf is an excellent player. He’s got so many qualities, so much to give. We have good fortune that he’s started so well. His form has been good, his attitude has been excellent.

“I would think that if he can keep this up, there’s no reason why he can’t continue to score goals.

“He certainly has made a conscious effort to work harder at that aspect of his game, there’s no doubt about that.”

“You know, players of his type can often be lured into being happy making goals or setting things up and fantastic dribbles and mazy runs,”

“I think this year he’s really thinking: ‘Right, I need to be a bit more, I need to get amongst the goals myself, I need to start shooting more’.

“But his goal in particular against Fulham, the second goal really gave me enormous pleasure.

“Because that’s something that we haven’t always been able to get from him. You know, throwing yourself in on a cross along the six yard box and getting injured in the process. That, for me, was a real goalscorer’s goal, and I’m certain that Wilf will be as proud of that goal as I am.”

Danagog Narrates How He Met Davido