Liverpool midfielder, Fabinho has come out to say that winning the EPL this season would be even more special for the club than their maiden title in 2019-20. He recently revealed that doing it back to back would mean his side go down in history alongside the best of the best. 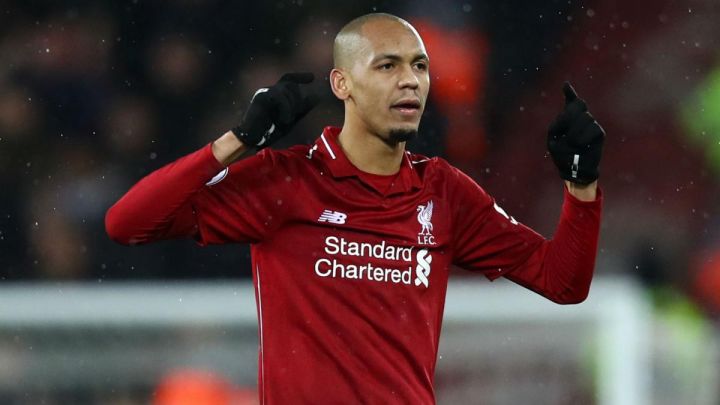 According to him, he wants Liverpool to be remembered for how well they played, the quality of the football played and for winning titles.

He added that taking into account everything that has happened this year, the difficulties of no fans in the stadiums and the busy run of fixtures and injuries the club has had, it would be a special title.

His words, “Yes, this team will be remembered for how well we play, the quality of our football and for winning the title,”

“But to fight for the second one would put us further in to football history. It would put us up there with teams in the Premier League that have won back-to-back titles. Teams like Manchester City.

“It would put us on the higher level and put us with the best teams in the history of the league.

“Taking into account everything that has happened this year, the difficulties of no fans in the stadiums and the busy run of fixtures and injuries we have had, it all adds to making the second title more special than the first one if we could do it.

“It would show that we have this constant desire at the club to be winners.”

On replacing VVD, “Recently they sent me a montage they made. It was Virgil’s hair and my face!

“When I came in, I felt good and comfortable and over time it’s got easier. When Virgil got injured, I expected to come in as centre-back and even the other players were joking. They were saying: ‘Fabinho the defender is back, he is here’.

“I was nervous at first but I think I have grown into it.

“Virgil is the one player you don’t want or expect to be injured. Last season he played in all 38 league games. He is never tired, never injured and the one you can always rely on. He really is the leader and when you lose someone of those qualities it’s a great shock.

“We were just shaking our heads at the time and didn’t want to admit it was true. I remember hearing the news reports and hoping they were false.

“Immediately after his injury, he didn’t say too much but after a few games he sent me a message congratulating me and saying I was playing well. That was great to hear.

“Now I just want to be able to watch his game and pick up things I should be doing, particularly the passes he makes. I would like to do that.

“He is the best in his position so it’s important that I look to his game.”

Appointment Of Next EFCC Boss Must Be A Credible Process –...