Home Politics Insecurity: APC-led Government Can’t Be Scored Excellent — Governor Abdullahi Sule
Facebook
Twitter
WhatsApp
Email
Telegram
Worried by the spate of insecurity in the country, Governor Sule of Nasarawa State has taken a swipe at the APC led administration saying that he can’t score the current governnent  ”excellent” especially in the area of  insecurity.
Governor Sule, a member of the  ruling All Progressives Congress, APC, made his feelings known when he appeared  on a Channels television interview.
According to Governor Sule, “Nigeria is about to become a failed state” stating that such statement was not new in democratic Nigeria as “the previous government of former President Goodluck Jonathan was also criticised in the same way”
He  recalled  that the Financial Times of London had once described Nigeria as a country going backwards economically and plagued with terrorism, illiteracy, poverty, banditry, kidnapping and risks of becoming a failed state if things don’t take a drastic turn.
According to him, “the UK-based newspaper also  recalled  the recent abduction and subsequent rescue of over 300 school boys in Kankara, Katsina State, revived memories of the 276 Chibok school girls abducted in Borno State in 2014”.
But Sule  in his reaction said the Financial Times of London and others claiming that Nigeria was about to be a failed state lacked knowledge of how the Buhari regime is tackling insecurity in the country.
His words:, “I do not give our administration, the APC, ‘excellent’, in the area of protecting lives and property of the people. I do not give APC ‘very good’.
”If you look at it very carefully, we have a lot to do in the area of security. There is no ambiguity about that. But are we improving in tackling the insecurity challenge? Yes.”
“My concern is people who think nothing is being done, people saying, ‘We are a failed state’. These are statements being made by people who probably don’t mean well for Nigeria and don’t understand what the APC   administration is doing and how the government is trying.
“If the (Kankara) children were still in the hands of those who kidnapped them, they will not even say Nigeria is almost a failed state, they will call us a failed state but now that they have been released, that is why we are getting a little credit that we are about to be a failed state.
“The ‘Failed State’ statement has come up many times in the international media, not just for this administration but  in the previous administration when Abuja was being burnt and when three states were under emergency. But now no state is under emergency,” Sule said. 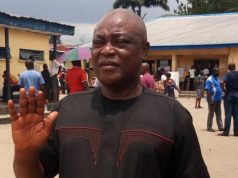 Everyone At Liverpool Want To Be EPL Champions – Klopp

Mazi Sam Ohuabunwa Should Be Hailed For His Important Service To...