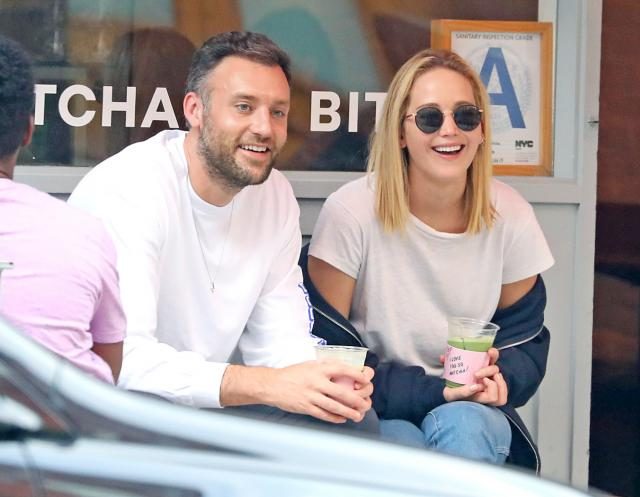 Jennifer Lawrence is now a married woman after heading to the altar with her bae, Cooke Maroney over the weekend.

TMZ have reported that they both tied the knot days back, at Belcourt of Newport, a lovely Rhode Island mansion.

Jennifer Lawrence got engaged to 34-year-old Cooke last year and since then it was always going to end this way.

Jennifer Shrader Lawrence (born August 15, 1990) is an American actress. The films she has acted in have grossed over $6 billion worldwide, and she was the highest-paid actress in the world in 2015 and 2016. Lawrence appeared in Time’s 100 most influential people in the world list in 2013 and in the Forbes Celebrity 100 list in 2014 and 2016.

During her childhood, Lawrence performed in church plays and school musicals. At age 14, she was spotted by a talent scout while vacationing in New York City with her family. Lawrence then moved to Los Angeles and began her acting career by playing guest roles in television shows. Her first major role came as a main cast member on the sitcom The Bill Engvall Show (2007–2009). Lawrence made her film debut in a supporting role in the drama Garden Party (2008), and had her breakthrough playing a poverty-stricken teenager in the independent drama Winter’s Bone (2010). She achieved wider recognition for her starring role as the mutant Mystique / Raven Darkhölme in the X-Men film series (2011–2019).

Lawrence’s career progressed with her starring role as Katniss Everdeen in the Hunger Games film series (2012–2015), which established her as the highest-grossing action heroine of all time. She went on to earn accolades for her collaborations with director David O. Russell. Her performance as a depressed young widow in the romance film Silver Linings Playbook (2012) earned her an Academy Award for Best Actress, making her the second-youngest winner of the award. Lawrence subsequently won a BAFTA Award for Best Actress in a Supporting Role for playing a troubled wife in the black comedy American Hustle (2013). She also received Golden Globe Awards for her roles in both of these films, and for her lead performance as Joy Mangano in the biopic Joy (2015). She has since starred in the science fiction romance Passengers (2016), the psychological horror film Mother! (2017), and the spy thriller Red Sparrow (2018).

Lawrence is an outspoken feminist and has advocated for Planned Parenthood. In 2015, she founded the Jennifer Lawrence Foundation, which has advocated for the Boys & Girls Clubs of America and the Special Olympics. She formed the production company Excellent Cadaver in 2018.

Jennifer Shrader Lawrence was born on August 15, 1990 in Indian Hills, Kentucky, to Gary, a construction worker, and Karen (née Koch), a summer camp manager. She has two older brothers, Ben and Blaine, and her mother brought her up to be “tough” like them. Karen did not allow her daughter to play with other girls in preschool as she deemed her “too rough” with them. Lawrence was educated at the Kammerer Middle School in Louisville. She did not enjoy her childhood due to hyperactivity and social anxiety and considered herself a misfit among her peers. Lawrence has said that her anxieties vanished when she performed on stage and that acting gave her a sense of accomplishment.