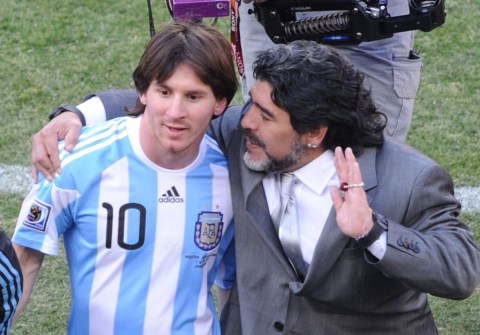 Cameroon and Barcelona legend, Samuel Eto’o has come out to mourn the late Diego Maradona.

He recently remembered the experience of watching the Argentine against Cameroon in a group game at the 1990 Fifa World Cup.

According to him, hundreds of people gathered to watch the game in his neighbourhood, and it was an absolute honour playing with Maradona despite the victory for his nation.

He added that Maradona will always be with us because he was the idol for a whole generation.

His words, “We watched it with 2,000 people in our neighbourhood in front of one TV,”

“When Diego said hello to our captain and then started juggling the ball on his shoulder, I thought we’re going to lose 10-0.

“And when we won that was so important for us, it gave so much hope to the youngsters in our country. Cameroon has beaten Argentina! That gave us hope!”

“I told my friend, that has to be a joke and it’s a terrible joke, because Maradona will always be with us,”

“He was the idol for a whole generation, and for future generations, for what he did in football. He was from another planet. Diego, you’re god, you’ll always be alive in our hearts.”

KE Publishing Presents "All Men Are Dogs It is What...

Dispatch of a Self-Defense Force Instructor to the South African National...