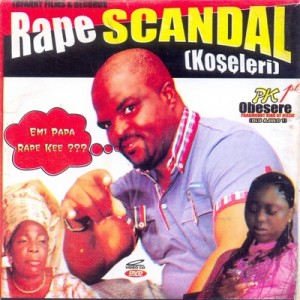 To further prove his innocence about the r*pe allegation, Obesere, has released a video CD, titled ‘r*pe Scandal’ – it has been in circulation since its release on Monday, March 17, 2014.

So far, the CD has sold thousands of copies!!!

“Obesere has released the video CD which explains better what actually transpired between him and his accuser, Nike Olaiya. I learnt the CD has sold thousands of copies. Everybody wants to see the face of the girl. I also learnt that some music promoters and marketers have been lobbying Obesere for the musical video of the incident, which I learnt may be released before the end of the second quarter of the year. But I think Papa is just waiting for the outcome of the police investigation before going to the studio for the album.” a source tells Encomium.
On the reason he churned out the CD, Tosibe king, as Obesere is fondly addressed, told Encomium that “I want people, especially my fans, to get a clearer picture of what really happened between myself and Nike Olaiya.”

Also, the inclusion of Alhaja Bola Omo Owo’s interview in the video is to let the public know that I have nothing to hide. I am sure everybody can recognize me, but I want people to also see the face of Alhaja Omo Owo so that they will all know she’s not a fake person.

r*pe Scandal was produced to explain everything in detail. It wasn’t for monetary reason, but all of a sudden, everybody keeps requesting for a copy.

“By now, Nike should just come out and defend herself. Her picture is also on the jacket of the CD. Everybody knows that Papa can never r*pe and that will never happen. I believe that won’t be the first time Nike will be swindling men. It’s God that exposed her. That’s why she is running up and down. Everybody has seen the face of a scammer. Very soon, she would show up or be fished out.”