Police officers in the Federal Capital Territory (FCT) have arrested four (4) suspects at Nyanya for armed robbery and impersonation. 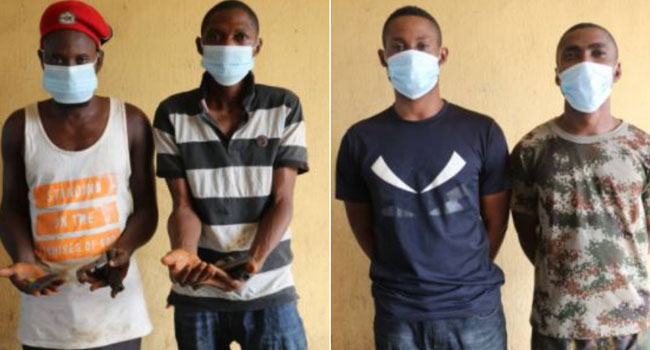 In a statement by ASP Yusuf Mariam, the Police Public Relations Officer for the Abuja command, those arrested include James Salifu 27 years and Umar Hamza 33 years both male, arrested by detectives during a routine stop and search operations on Sunday 6th June 2021.

ASP Mariam further noted that the suspects who intended to dispossess their unsuspecting victim of his vehicle confessed to being members of an armed robbery syndicate terrorizing the Nyanya axis.

Exhibits recovered from them are: two (2) locally made pistols, four (4) rounds of live ammunition, and charms.

In another development, one Patrick John (26-year-old) and Chinyere Ikenna (31-year-old) both male, were arrested for impersonating military personnel and defrauding members of the public.

The duo who confessed most of their fraudulent activities were caught while attempting to rob their victim of his motorcycle along Nyanya bridge.

Exhibits recovered include one (1) motorcycle and military camouflage gears.

The police spokesperson noted that all the suspects will be arraigned in court upon the conclusion of an investigation.

The command urged residents to remain calm while reaffirming its unflinching commitment to rid the FCT of every form of criminality and protect the lives and property of residents.

I Talk About My Wealth To Motivate Others – Shatta Wale

My Management Style Is Similar To That Of Pep Guardiola – Xavi