Police officials in Lagos have arrested a police inspector for attacking Innocent Adadu, a photojournalist, during a protest in the state’s Maryland city. 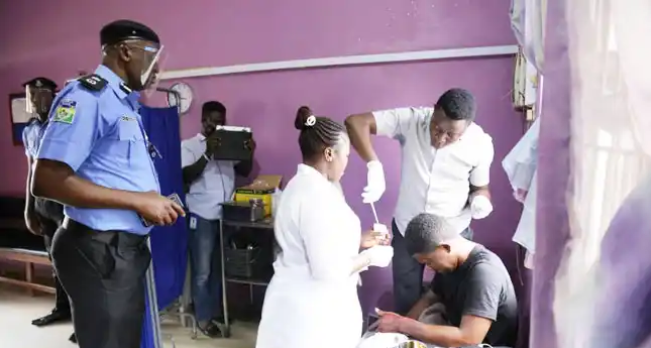 This was stated in a statement released by Olumuyiwa Adejobi, the State Police Command spokesman.

The police inspector was said to have struck the journalist, Kayode Jaiyeola, who works with The Punch Newspaper, with a stick, Adadu, attached to the Police Mobile Squad, injuring him.

The Police Commissioner, Hakeem Odumosu, ordered the immediate detention of the officer in response to the growth.

“The Police Commissioner, Lagos State, CP Hakeem Odumosu, has ordered the immediate detention and orderly room trial of one police Inspector, Adadu Innocent attached to PMF 22 Ikeja for hitting and injuring one Kayode Jaiyeola of the Punch newspaper in Maryland, Lagos on Thursday, October 1 , 2020 at approximately 11:10 a.m.,” the statement read in part.

“The preliminary findings carried out by the Commissioner of Police and eye witness accounts from senior officers on ground, revealed that the police inspector suddenly attacked the journalist, without any previous altercation or confrontation.

In an additional statement by the police spokesman, he said, “This propelled the Commissioner of Police to order for his trial in order to serve as a deterrent to others who are fond of engaging in unprofessional and unethical conduct,”

Osun State Workers Should Remain Patient With The Government – Rauf...

Sunday Oliseh Going Back To Europe For Medical Check-up