Together with one other woman, she was rescued while two suspects, including an armed dealer, were arrested.

The 25-year-old female lawyer was abducted by gunmen at her home in the Rumuokwurusi Obio-Akpor Local Government Area on Saturday, leading to an uproar by legal practitioners calling for her quick rescue.

Mukan, the police commissioner, had previously given an update on the preliminary investigation into Ajayi’s abduction.

The investigation reveals that the gunmen had kidnapped a man earlier and used his car to abduct Ajayi using military camouflage at her residence the same day.

He also disclosed that the police now have the kidnappers’ names. 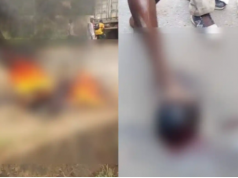 Results have not been collated in 23 states – Jega

Interoute One Bridge supports KNPO in its mission to cut child...

Buffon Reacted The Way He Should Against Real Madrid – Pirlo