The removal was with immediate effect, TheInfoStride can authoritatively report.

It was contained in a letter dated October 15, signed by Tayo Akpata, Solicitor General of the Federation and Permanent Secretary, Ministry of Justice.

The sack was an interesting turn of event as Mr. Jaja had sought to the suspension of NCC Director-General, John Asein.

The former chairman wrote to the President to suspend and investigate the DG.

But five board members dissociated themselves from the action.

They told the Attorney General of the Federation and Minister of Justice, Abubakar Malami, that they never endorsed Jaja’s move and that he acted on his own.

Their memo which signed by Maria Towo Austin-Odigie, a representative of the Federal Ministry of Justice on the NCC board, said Jaja was orchestrating allegations and petitions against the NCC chief.

They accused him of personal vendetta and undue interference in operations of the agency.

In his response sent to TheInfoStride, Mr. Jaja suggested that some board members and officials were shielding Asein.

The ex-chairman noted that since he took a strong stance against “certain corrupt staff, officials and board members”, there have been unrelenting attacks on his reputation and threats to life.

Jaja reported them to the Presidency, the AGF and the Police, but has now lost the battle.

Akpata’s three-paragraph letter read in part: “I have been directed to inform you of you removal as the Chairman, Governing Board of the Nigerian Copyright Commission by President of the Federal Republic of Nigeria, His Excellency, Muhammadu Buhari, GCFR, as conveyed vide letter Ref: 59312/V/230 of 28th September, 2020.

“Your removal is with immediate effect and you are, therefore, expected to handover all properties of the Commission in your possession to the Director-General.

“While wishing you success in your future endeavours, please accept the assurances of the warm regards and best wishes of the Honourable Attorney General of the Federation and Minister of Justice.” 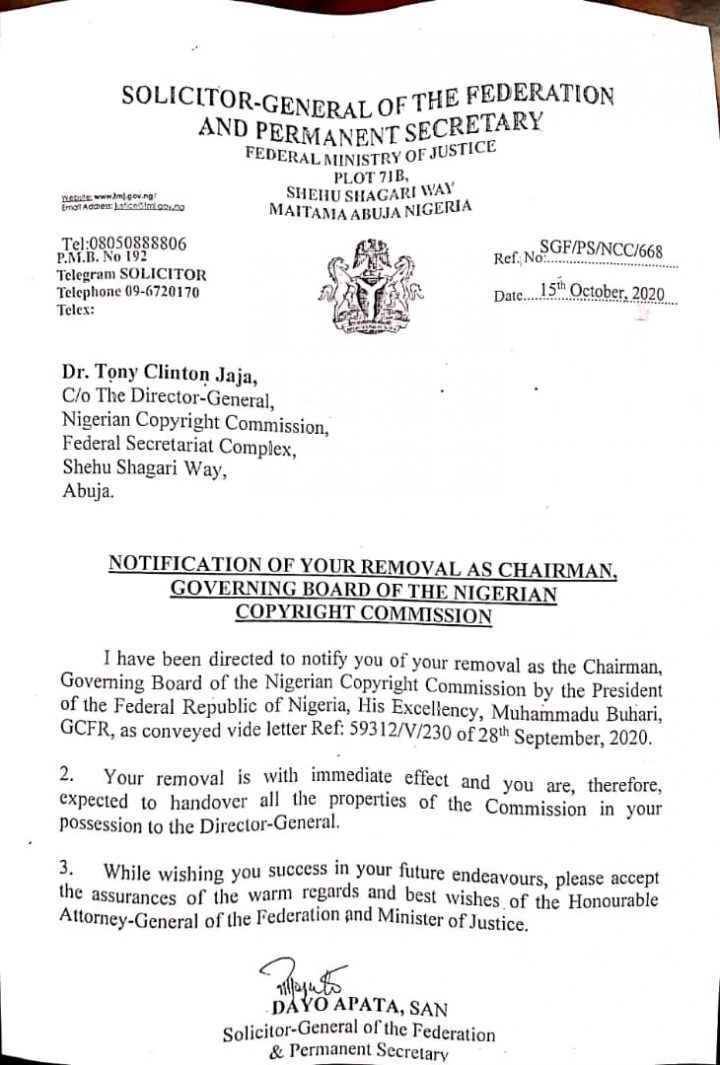 LG Chairmen Must Be Hardworking And Accountable – Ambode

John Oyegun Is Not Performing Well As National Chairman – Charles...