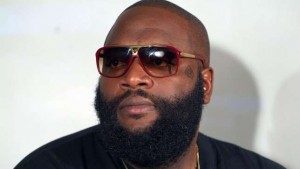 The Mayback Music Group boss is using his post-jail music to come after Drake with lyrics seeming like death threats to the Canadian rapper and his unborn child.

Ross raps : “Sweat pants, hair tied, chillin’ with no make up on/ That’s when you’re the prettiest/ I hope that you don’t take it wrong/ You don’t even trip when friends say, ‘you ain’t bringing Drake along?'”

Some of Ross’ lyrics are an obvious reference to Drake’s ‘Back to Back’ diss lyrics. While Drake asked Meek if that was “a world tour or his girl’s tour,” in a reference to Meek opening up for Nicki Minaj, Ross brought up that lyric once more. Drake dissed Meek, saying that when Nicki asked Meek to “open up more,” Minaj didn’t mean for Mill to open up for her as an opening act. Ross claims Meek made $1 million by opening up for Minaj on that tour.

“Color money got your b**** out on a world tour/ My lil homie made a million on his girl tour,” he rapped.

He continued with a an alleged death threat on Drake’s life and that of his unborn child: “We back to back and down to whack a n**** unborn/ Miami n****** got them changing all the gun laws.”

Adding: “So run Forrest got some shooters and they dying too/ I got more money than that p**** that you’re signed to/ Survive who call this a color money conversation/ A hundred stacks will cover everything I’m contemplating/

“Full confrontation home invasion for the quarter key/ Them cheap ass condos ain’t the safest place you want to be/ Call up my C.O. but you better not go call police/ So when I see you I’ma give you what you wanna see/ You wanna see?”

I Will Address Food Security In The Country – Buhari