Troops of the Nigerian Army under the Operation Hadin Kai have killed several ISWAP Terrorists in Dikwa town, Borno State. 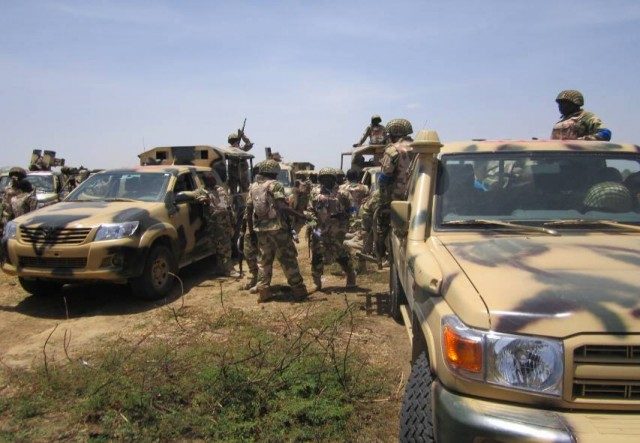 According to a statement issued on Wednesday by the Director Army Public Relations, Brigadier General Mohammed Yerima, the gallant troops decisively dealt with the terrorists who were attempting to infiltrate the town on Tuesday.

The terrorist elements were said to have mounted five gun trucks, others mounted motorcycles, while others moved by foot.

They were, however, met with superior fire power by troops in conjunction with air bombardment by Air Task Force.

“The marauding terrorists were thoroughly vanquished forcing them to withdraw in high state of confusion abandoning their truck, guns and ammunition,” the statement read.

“During the encounter, six members of the terrorists groups were neutralized, several others were severely injured while the survivors withdrew in total disarray leaving behind their deceased colleagues”.

Three soldiers, however, sustained various degrees of injuries but have now been stabilised.

To mop up the area, troops conducted exploitation in the early hours of Wednesday in conjunction with the Civilian Joint Task Force and hunters along the terrorists’ withdrawal routes and recovered 90 rounds of 7.62 mm x 54 on links belonging to the fleeing terrorists.

Meanwhile, the Chief of Army Staff (COAS), Major General Faruk Yahaya, has commended the gallant troops over the feat and charged them to remain resolute and steadfast.

He urged them to maintain the tempo in order to ensure total obliteration of terrorist groups within the North East region.

Jada Pollock Got From Karma From Wizkid – Binta Diamond

I Have Been Poor This Season – Willian

Explosion by Female Suicide Bomber Kills 3,Injures others in Borno

Davido Recorded A Song With T.I?