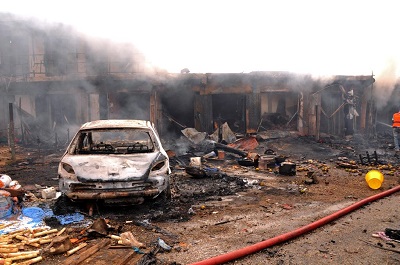 A bomb blast has ripped through a crowded commercial area in Damaturu, the capital of Yobe State, leaving dozens feared dead, according to PREMIUM TIMES.

The report said dozens of persons were either killed or injured as a result of the blast.

Citing accounts by residents, the blast was said to have occurred at about 11a.m.

A resident of Damaturu, Abdulmalik Audu, told the online news medium that the incident, which occurred behind the main Damaturu motor park where there are commercial shops and stalls, left many dismembered human parts littering the scene.

Details of the casualties and cause of the blast had not yet been ascertained as of the time of publishing this report.

READ  I Have Not Abandoned Atiku - Gbenga Daniel

A girl said to be no older than 10-years-old has been identified as the lone suicide bomber, who attacked the popular Bayan Tasha market/motor park in Damaturu on Saturday morning killing five and injuring several others.

Chairman of the Nigerian Union of Road Transport Workers, NURTW, in the state, who witnessed the gory incident narrated how it happened.

“We have security men at all the gates and everybody entering the motor park we subjected to thorough search before they enter the park. It was in the process of searching today, that a little girl of about 10 years old refused to be searched and before you could blink an eye the bomb, which the girl concealed under her Hijab, exploded killing her, the security staff and 3 other persons while several others were injured”, he said

Also three bomb cylinders that were not detonated at the scene were discovered by the police anti-bomb squad as the place was condoned off .

Meanwhile, medical and security officials are busy on the scene of the attack evacuating the dead and rushing those injured to the hospital.