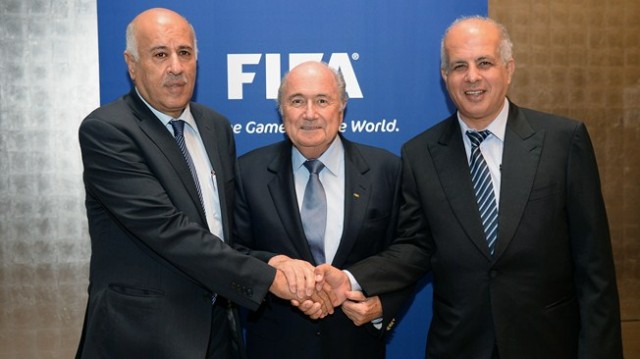 Under the chairmanship of FIFA President Blatter and in the presence of FIFA Secretary General Jérôme Valcke, the President of the Israel Football Association (IFA), Avi Luzon, and the President of the Palestinian Football Association (PFA), Jibril Al Rajoub, as well as representatives from the AFC and UEFA, met at the Home of FIFA in Zurich on Monday for an evaluation session of the Task Force Israel-Palestine.

During the meeting, the parties analysed the implementation of the parameters agreed at the meeting on 23 September 2013 for the facilitation of the movement of players, coaches, referees, officials and equipment into, out of and within Palestine.
Both associations provided progress reports and agreed on the fact that the new mechanism had improved communication between them while accelerating the decision-making process concerning the movement of football representatives.

To further facilitate the application of the said parameters, both associations will strengthen the contact between their liaison officers. The overall process will be monitored by FIFA in close cooperation with the AFC and UEFA with the objective of signing a Memorandum of Understanding ahead of the upcoming FIFA Congress. At the suggestion of both associations, FIFA President Blatter agreed to visit Israel and Palestine in April to meet the Israeli and Palestinian political authorities.

The establishment of the FIFA Task Force Israel-Palestine was announced by FIFA President Blatter in July 2013, following the mandate he received during the 63rd FIFA Congress and his subsequent trip to the Middle East.

“I’m pleased by the progress made by both associations in the past months. I remain confident that further important steps will be taken in the near future in order to reach a good solution for the development of football in Israel and Palestine,” said FIFA President Blatter.

Pharmacist at The Eko Hospitals