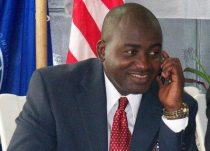 Hassan Musah Bility has been re-elected president of the Liberia Football Association for a second term.

Bility, who has headed the body since March 2010 saw his mandate extended at the Association’s Elective Congress on Saturday, 22 March 2014 in Buchanan, third largest city in the West African country.

He was retained unopposed at the congress attended by 51 of the 54 representative bodies.

Citizens Should Not Resist Arrests, Even Illegal Ones – Police

The Time To Criticize Buhari Is Not Now – Bode George