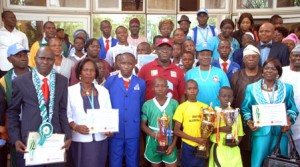 Ekiti State Governor, Dr Kayode Fayemi; (middle) and Deputy Governor, Prof Modupe Adelabu, with awardees shortly after a special reception for Teachers, Students and Schools that have excelled in National competitions in Ado-Ekiti.

The State which also produced the third best primary school teacher got virtually all the trophies for the Fracophone competition for States in the Southwest as Victor Obi of Anglican High School Ado Ekiti and Felix Adegboyega of Ekiti Baptist High School emerged first and second respectively in the competition.

In the quiz aspect of the Francophone competition Omoya Timileyin of Anglican Grammar School Ado Ekiti came first while the same school led by Omosule Banke came second in the Dance competition.

As if those trophies were not enough, Makinde Seun of the State College of Education Demonstration Secondary School, Ikere Ekiti emerged first in the annual National Mathematics competition organized by the National Mathematics Association of Nigeria and also came second in the International Junior Olympian Competition.

Receiving the awardees, Governor Kayode Fayemi expressed delight at the rapid transformation in the State’s education sector, saying that the investment of the present administration is gradually being reciprocated and yielding fruits.

The Governor who said that the State has not had enough of the awards stressed that the emergence of another Ekiti teacher as the best Nigerian teacher is a proof that the 2012 feat was not a fluke but an evidence of that the fountain of knowledge is finally returning to its place as a leading light in the education sector.

Dr Fayemi while noting that the State College of Education Ikere Ekiti now ranks as one of the best colleges of education in Nigeria stated that the efforts on the State University has also produced good fruits with EKSU moving from 216th position to 17th position in the webometric ranking of Varsities.

” This is consistent with our character to always produce the best. We may not be the first State in this country but we are the best State there. This is not happening just in the basic education, it is also happening in our tertiary education. Our College of education is now one of the best in the country and our University has moved from 216 in the webometric ranking of Universities in the country to 17, even beating some older universities to it. In 2013, we produced the best law result at the Law School. Anyone who has visited the University recently will see the huge transformation that has taken place in the last three and a half years of this administration”, he said.

Meanwhile Governor Fayemi has offered Makinde Seun, an orphan who won two trophies for the College of Education Demonstration School a scholarship to continue his education.

The Governor expressed amazement at how the 16 year old had managed to cope with the challenges of funding his education even as he hinted at setting up an indigent scholarship for brilliant students in the school.

He commended Ekiti teachers for putting in their very good performance to prove that public education has much more to offer the people than private education.

The Governor promised to all necessary tools and better welfare packages for the teachers , saying that they deserve the best for their roles in the change in the education sector.

While stating that education is not a privilege but a right, Dr Fayemi urged parents to assist teachers so that the time teachers invest in students will not end up in waste.

The State Deputy Governor and Chairperson of the State Universal Basic Education Board (SUBEB), Prof Modupe Adelabu commended Fayemi for the investment that has repositioned the State, saying that winning accolades and awards has become a tradition in the State since Fayemi’s emergence in 2010.

Adelabu congratulated the parents and teachers of the awardees for nurturing greatness in the students.

Also speaking, the best teacher, Mr Osiagwu said his emergence as the best teacher in Nigeria is not unconnected to the conducive teaching environment which the present administration has created for fruitful teaching and learning to take place.

Osiagwu who now has a Kia Picanto car as a reward for his excellence thanked the Governor and promised to continue to give his best to the students.