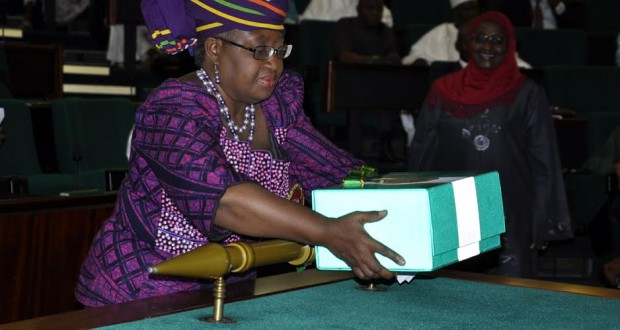 The House of Representatives on Thursday passed the 2014 budget of N4.695 trillion. The amount is N53 billion higher than the N4.642 trillion estimates submitted by the executive.

President Goodluck Jonathan on December 19, 2013, through the Co-ordinating Minister of the Economy and Minister of Finance, Ngozi Okonjo-Iweala, submitted the 2014 budget to the National Assembly for consideration and passage

The budget passed was based on an oil price benchmark of $77.5 per barrel and crude oil production of 2.3883 million barrels per day.

It put the Gross Domestic Product (GDP) growth rate at 6.75 per cent, inflation rate at 9.5 per cent and Exchange Rate at N160 to one dollar.

Speaker Aminu Tambuwal commended the lawmakers for coming together to pass the budget.

According to him, the passage of the budget is for the common good of Nigerians.

The Senate had on Wednesday passed a N4.695 trillion 2014 appropriation bill.

Meanwhile, Chairman of the House Committee on Media and Public Affairs, Zakari Mohammed (APC-Kwara), has described the passage of the 2014 budget “as an act of patriotism by members of the House”.

Mr. Zakari, while speaking at a news conference, said that when the house resumed from its Easter break, it would continue to look at other important issues.

He said that contrary to insinuations in some quarters, the budget passed by the house was implementable.

The House has adjourned plenary until April 29 for the Easter break.

The House and the Senate now need to harmonize the budget before sending it to President Goodluck Jonathan for signing into law.

ExxonMobil, Others Must Collaborate Effectively To Boost Our Oil Sector –...