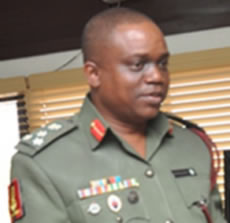 The National Youth Service Corps, NYSC, says while corps members will not be forced to serve in the three North-East states currently emergency rule, it has noticed that some of them still demand to be posted to Adamawa, Borno or Yobe.

The NYSC Director General, Brigadier-General Johnson Olawumi made the clarification when he appeared before the National Conference Committee of Civil Society, Labour and Youth.

The DG said, “We have stopped sending corps members to the three troubled states in North-East under emergency rule. Surprisingly, some still demand to be posted there; but nobody is forced to go there”.

He said there was no way the NYSC would stop those demanding to be posted there, stressing that the embargo on the three states would still be in place until the security situation improves.

Olawumi also spoke on areas the NYSC is exploring to make the corps members self-sufficient after their one year of national service.

These areas, he said, included skills acquisition and entrepreneurship development programme, which he said had been established in all states and Abuja to train corps members.

APC Primaries: Atiku Not Ready To Step Down, But Tambuwal’s Emergence...